Army chief Genera­l Qamar Javed Bajwa acknow­ledged “the sacrif­ice of Sepoy Waqas for the securi­ty of our mother­land
By Our Correspondent
Published: January 31, 2017
Tweet Email 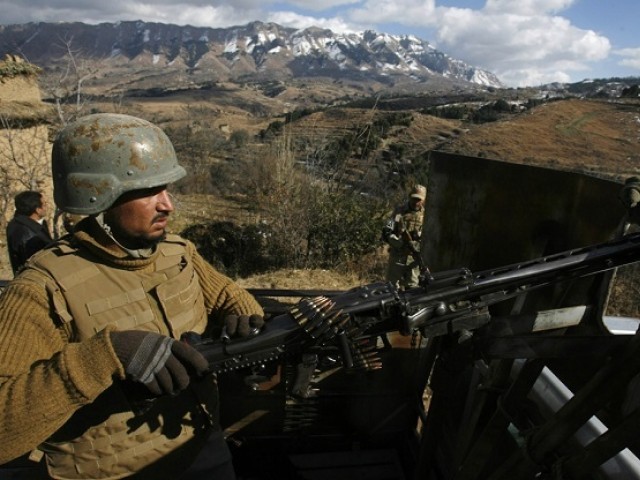 ISLAMABAD: A Pakistani soldier was killed in a cross-border attack on a Khyber Agency check post on Monday, prompting Islam­abad to urge Kabul to check terrorists’ ‘freedom of movement’ on its side of the border.

According to Inter-Services Public Relations (ISPR), Sepoy Waqas, who was performing his duty at the check post, succumbed to the injuries inflicted on him by terrorists who fired from across the border. The soldier breathed his last at the Peshawar Combined Military Hospital where he was taken in a critical condition.

Army chief General Qamar Javed Bajwa acknowledged “the sacrifice of Sepoy Waqas for the security of our motherland.” His Namaz-e-Janaza was held at the Peshawar Corps Headquarters and was attended by Corps Com­mander Lt Gen Nazir Ahmed Butt, IGFC Maj Gen Shaheen Mazhar Mehmood, the K-P chief secretary and a large number of officers and soldiers.

The military’s media wing said terrorists were resorting to fire from across the border taking advantage of weak border control on the Afghanistan side. “There is a requirement to check terrorists’ freedom of movement on Afghan side of the border,” the army demanded in a statement.

The latest incident has added to the already tense relationship between Pakistan and Afghanistan. At the heart of the problem is Kabul’s continued allegations against Pakistan for providing what it called ‘safe havens’ to terrorists launching the cross border raids. Islamabad has its own list of grievances starting from weak border controls to tacit support being provided by Afghan intelligence agencies to the outlawed Tehreek-e-Taliban Pakistan (TTP) and other anti-Pakistan elements.

Despite Afghanistan’s relentless campaign, Pakistan is still seeking to resolve all differences through dialogue. Following the recent terrorist attacks in Afghanistan, Gen Qamar telephoned Afghanistan’s President Ashraf Ghani to condemn the latest wave of violence and to offer his support to fight menace of terrorism jointly. The army chief, however, urged the Afghan president to stop blame game because it only served the purpose of those who never wanted smooth relationship between the two neighbors.

Ghani, nevertheless, stuck to his tirade against Pakistan and said his country wanted ‘serious talks’ about the future of its ties with the neighboring country. The continued blame game has prevented the army chief from finalising a plan for a crucial visit to Kabul.

Global crude rates: Prices of petroleum products set to rise by 38.6 per cent