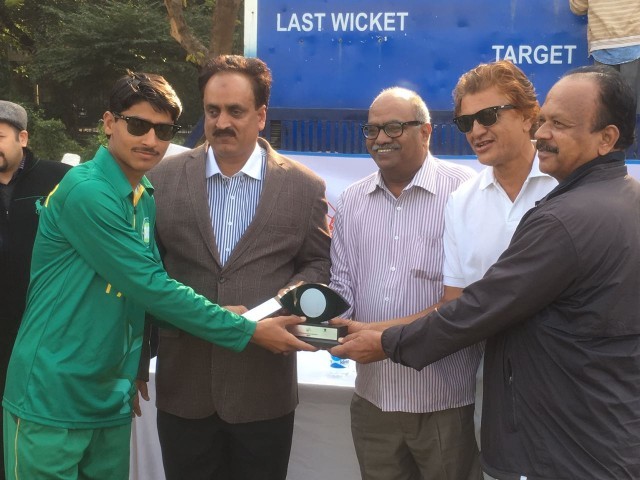 KARACHI: An all-round performance by Badar Munir guided Pakistan Blind Cricket Team to a win in their opening match of the T20 Blind Cricket World Cup as they defeated New Zealand by 10 wickets at the Siri Fort Sports Complex in New Delhi, India on Monday.

In reply, Pakistan reached the target in just 7.2 overs without losing a wicket as Munir struck 17 fours and a six in his 35-ball 92-run knock to build an unbeaten partnership of 117 runs with Mohsin, who  made 15 off 12 balls hitting a four.

In the other match, India defeated Bangladesh by 129 runs in their opening match of the tournament.

Pakistan and India are leading the table and will face England and West Indies respectively on Tuesday.

Pakistan Blind Cricket Council President Syed Sultan Shah expressed his delight after Pakistan’s impressive showing in the opening match. “Winning by such a huge margin against New Zealand is great achievement by the players. This win will help the players in the upcoming matches,” Shah told The Express Tribune from India.

He added that the team is confident about their next match against England. “England are a tough team and we will have to do more to beat them. However, the way Munir played today, he deserves the appreciation.”

Meanwhile, Pakistan captain Muhammad Jamil said that the team is hoping for an equally strong performance against England. “All the players are in good form and we are hopeful of putting in the same level of performance in the second match as well.”

Damsels in men’s teams without distress