It was the train's first such trip since rebels overra­n east Aleppo in the summer of 2012
By AFP
Published: January 25, 2017
Tweet Email 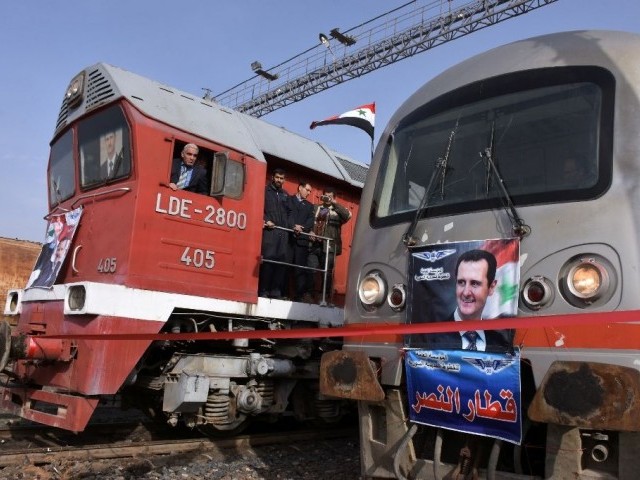 Syrian railway workers wait for a train to leave Aleppo's Jibreen station, on the city's eastern outskirts, for a one-hour round trip on January 25, 2017. PHOTO: AFP

ALEPPO: Hundreds of Syrians took a train through battle-scarred east Aleppo on Thursday as services resumed for the first time after four years of fighting, a photographer working with AFP said.

Men, women and children peered out the windows as they rode across eastern districts after regime forces recaptured them from rebels in December, the photographer said.

It was the train’s first such trip since rebels overran east Aleppo in the summer of 2012, effectively dividing the northern city into a regime-held west and a rebel-controlled east.

A driver in a leather jacket ferried the full carriages from Jibreen station on the city’s eastern outskirts across the city’s former front line to Aleppo’s main Baghdad railway station.

As they slowly moved through the rubble, the passengers — surprised at the extent of the damage — pulled out their mobile phones to take pictures.

On the ground in the eastern side, which is strewn with debris after years of air strikes, people gathered by the tracks, staring at the first train they had seen since 2012.

Passengers rode the train, which bore portraits of President Bashar al-Assad at the front and in the carriages, two ways in a one-hour round trip, the photographer said.

Syria’s Transport Minister Ali Hamoud said the resumption of train services between the two stations came after “the victory of the heroes of the Syrian army, returning safety and stability to the whole city”.

Because of Syria’s conflict, services remain suspended between Aleppo and other main cities.

An inspection uncovered 40 points of damage “from terrorism” along the line, the minister said, using the term the regime uses to refer to the rebels.

The line was reopened after repairs that took less than 20 days, he said in a statement carried by the SANA official news agency.

Najib Faris, head of the public railway company, announced there would be four trips a day between the Jibreen and Baghdad stations for up to 600 passengers for each trip.

Once an economic hub, Aleppo has been ravaged in the country’s nearly six-year war that has killed more than 310,000 people and displaced millions.

The conflict started in 2011 with the brutal repression on anti-government protests and has since spiralled into a complex war.