Evacua­tion of Aleppo's last rebel enclav­e would end years of fighti­ng for the city and mark a major victor­y for Assad
By Reuters
Published: December 15, 2016
Tweet Email 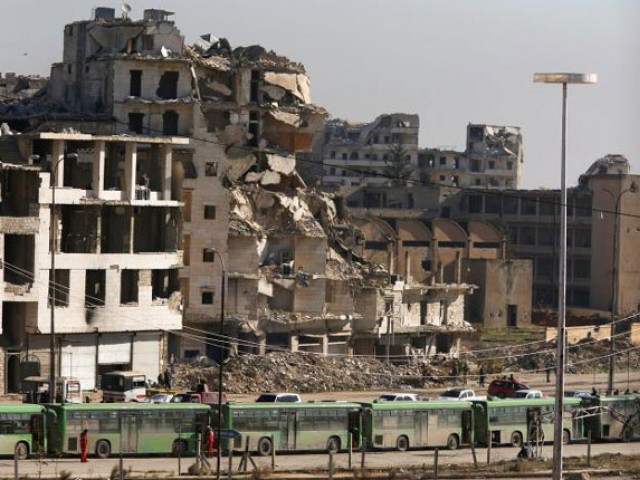 Buses are seen parked in Aleppo's government controlled area of Ramouseh, as they wait to evacuate civilians and rebels from eastern Aleppo, Syria December 15, 2016. PHOTO: REUTERS

An operation to evacuate thousands of civilians and fighters from the last rebel bastion in Aleppo was under way on Thursday despite an earlier attack on a medical convoy by pro-government forces.

As buses and ambulances moved into the besieged enclave, the International Committee of the Red Cross said efforts to evacuate around 200 wounded people, part of a wider ceasefire deal, had begun.

Russia, a major ally of Syrian President Bashar al-Assad, said the evacuation of 5,000 Syrian rebels and their family members from eastern Aleppo had started.

The evacuation of Aleppo’s last rebel enclave would end years of fighting for the city and mark a major victory for Assad.

“Thousands of people are in need of evacuation, but the first and most urgent thing is wounded, sick and children, including orphans,” said Jan Egeland, the UN humanitarian adviser for Syria.

A Reuters witness in the government-controlled part of the city said columns of black smoke could be seen rising from the rebel-held area.

Residents hoping to be taken out have been burning personal belongings they cannot take with them and do not want to leave for government forces to loot. “Outside every building you see a small fire, papers, women’s clothes,” one resident told Reuters.

Russian soldiers were preparing to lead rebels out of Aleppo, the defence ministry in Moscow said. Syria had guaranteed the safety of rebels and their families, who would be taken towards Idlib, a city in northwestern Syria which is outside government control.

Russia would use drones to monitor rebels and their families being transported in buses and ambulances along a humanitarian corridor, the ministry said.

The evacuation agreement would include the safe passage of wounded from the Shia villages of Foua and Kefraya near Idlib that are besieged by rebels, according to a military media unit run by Hezbollah, a group allied to Assad. A convoy set off to evacuate the villages on Thursday, Syrian state media said.

On Wednesday, rebels attributed the hold up of the ceasefire and evacuation of the insurgent area of Aleppo to demands by Iranian-backed militias that the wounded in Foua and Kefraya should be taken to government areas.

Efforts to evacuate eastern Aleppo began earlier in the week with a truce brokered by Russia, Assad’s most powerful ally, and Turkey, which has backed the opposition. That agreement broke down following renewed fighting on Wednesday and the evacuation did not take place then as planned.

An official from the Jabha Shamiya rebel group said a new truce came into effect at 2.30am on Thursday. Shortly before the new deal was announced, clashes raged in Aleppo.

Government forces made a new advance in Sukkari – one of a handful of districts still held by rebels – and brought half of the neighborhood under their control, according to the Syrian Observatory for Human Rights, a monitoring group.

The Russian defense ministry said – before the report of the government forces’ advance in Sukkari – that the rebels controlled an enclave of only 2.5 square km.

The evacuation plan was the culmination of two weeks of rapid advances by the Syrian army and its allies that drove insurgents back into an ever-smaller pocket of the city under intense air strikes and artillery fire.

By taking control of Aleppo, Assad has proved the power of his military coalition, aided by Russia’s air force and an array of Shi’ite militias from across the region.

Rebels have been backed by the United States, Turkey and Gulf monarchies, but that support has fallen far short of the direct military assistance given to Assad by Russia and Iran.

Russia’s decision to deploy its air force to Syria more than a year ago turned the war in Assad’s favor after rebel advances across western Syria. In addition to Aleppo, he has won back insurgent strongholds near Damascus this year.

The government and its allies have focused the bulk of their firepower on fighting rebels in western Syria rather than Islamic State, which this week managed to take back the ancient city of Palmyra, once again illustrating the challenge Assad faces reestablishing control over all Syria.

Carla del Ponte, a UN investigator and former UN war crimes prosecutor, told German newspaper Die Zeit that Russian and Syrian bombing of homes, hospitals and schools amounted to war crimes, as did the starving of parts of Aleppo for months by militias loyal to the government.