Our soldiers are the best in the world: army chief

Our soldiers are the best in the world: army chief 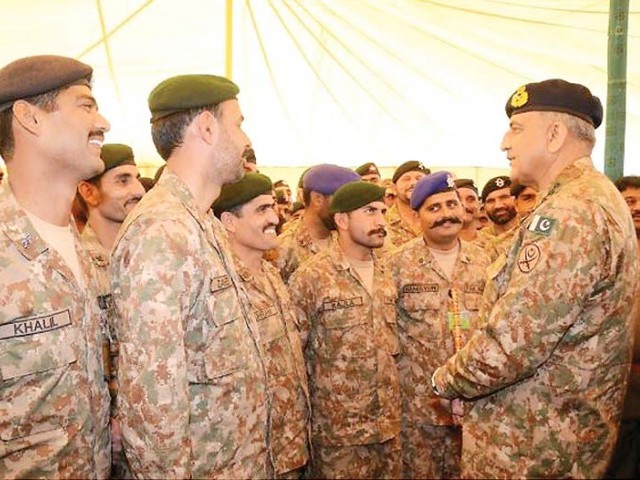 ISLAMABAD: Chief of Army Staff General Qamar Javed Bajwa has directed soldiers and troops to prepare themselves to thwart any kind of security threats that the country faces.

Gen Qamar was speaking to soldiers and officers during a visit to the elite strike corps at Multan garrison on Monday, according to the Inter-Services Public Relations (ISPR).

The army chief appreciated participation of troops from Multan corps in the ongoing counterterrorism operations in the Federally Administered Tribal Areas and Khyber-Pakhtunkhwa.

‘Saudi defence at par with our own’

He especially praised them for concurrently keeping themselves fully trained and prepared to thwart challenges of conventional war.

The army chief said Pakistan Army’s soldiers are the best in the world. “The army is what its soldiers are. I am proud to be the chief of army staff of a brave and highly professional army,” he added.

“Our experience of counterterrorism operations has made us battle hardened which is a valued add-on in operational preparedness,” he said. Gen Qamar directed officers and soldiers to keep themselves fully trained and abreast to defeat all types of threats.

He also laid a floral wreath at Yadgar-e Shuhada (monument of martyrs) and offered Fateha for the martyrs. The corps commander briefed the army chief on operational preparations and administration of troops. Later Gen Qamar addressed soldiers and officers of the garrison.