It is a profou­nd irony and traged­y that the Holy Quran, despit­e its strong affirm­ation of human equali­ty and the need...
By Dr Riffat Hassan
Published: May 14, 2010
Tweet Email 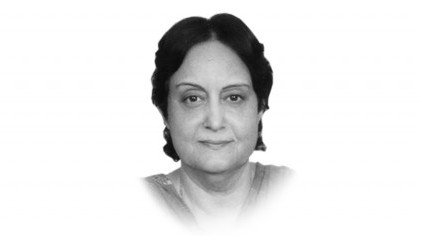 The writer is Professor Emerita at the University of Louisville, US, and a scholar of Islam and Iqbal.

It is a profound irony and tragedy that the Holy Quran, despite its strong affirmation of human equality and the need to do justice to all of God’s creatures, has been interpreted by a number of Muslims as sanctioning various forms of human inequality and even enslavement. For instance, even though the Quran states clearly that a man and a woman were made from the same source, at the same time, in the same manner, and that they stand equal in the sight of God, they are manifestly unequal in virtually all Muslim societies, in which the superiority of men to women is taken to be self-evident.

Undoubtedly one of the most important issues which confronts the Muslim ummah in the 21st century is that of gender equality and gender justice. The Quran, because of its protective attitude towards all downtrodden and oppressed classes of people, appears to be weighted, in many ways, in favour of women. However, a review of Islamic history shows that many of its women-related teachings have been misused in Muslim culture which is still largely dominated by patriarchal values. Since the 1970s, largely due to the pressure of anti-women laws which have been promulgated in a number of Muslim countries, women with some degree of education and awareness have begun to realise that religion is being used as an instrument of oppression rather than as a means of liberation from unjust social structures and systems of thought and conduct.

Many of the issues are not new issues but the manner in which they are being debated today is something new. Given the fact that there is more Quranic teaching on the subject of how to maintain justice in the home, preserving the rights of all members of the household equally, it is deeply disturbing that even in the 21st century many Muslim women are subjected not only to physical and economic subjugation, but also to moral, intellectual and spiritual degradation through a misrepresentation of the essential message of Islam.

Having spent more than three decades doing research in the area of women in Islam, I have concluded that the Quran does not discriminate against women. In fact, in view of their disadvantaged and vulnerable condition, it is highly protective of their rights and interests.

It is important to point out that today an increasing number of Muslims are realising that if the ummah is to become worthy of being the ‘khalifah’ (or vicegerent) of God on earth and to actualise its highest potential, it will have to make a strong commitment to establishing gender-justice and gender-equality in all spheres of life. No society can claim to be truly Islamic unless it identifies, in word and in deed, that a man and a woman are equal before God and that each has an equal right to develop his or her God-given capabilities to the fullest.