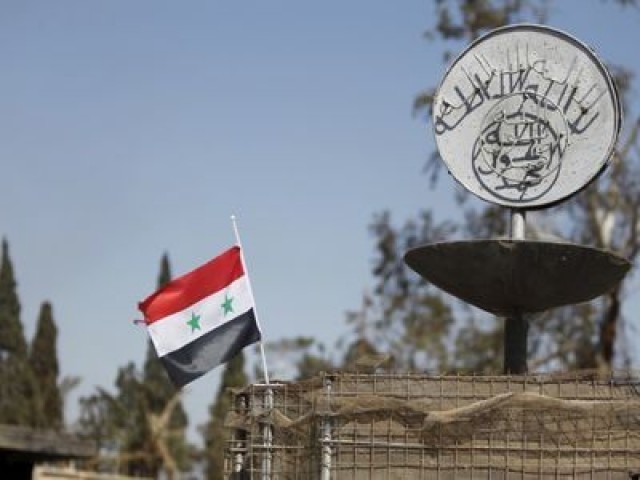 A Syrian national flag flutters next to the Islamic State's slogan at a roundabout where executions were carried out by ISIS militants in the city of Palmyra, in Homs Governorate, Syria April 1, 2016. PHOTO: REUTERS

BEIRUT: Islamic State is fighting hard to reinforce its presence in Syria as it loses ground in Iraq, deploying fighters to seize full control of a government-held city in the east while at the same time battling enemies on three other fronts.

It underlines the residual strength of Islamic State even after its loss of a cluster of cities in Iraq and half of Mosul, and points up the challenges facing US President Donald Trump in the war he has vowed to wage against the group.

The jihadists have opened their most ferocious assault yet to capture the last Syrian government-controlled area in the eastern province of Deir al-Zor, a pocket of Deir al-Zor city that is surrounded by Islamic State territory.

The assault has raised fears for tens of thousands of people living under government authority in the city. Their only supply route has been cut off since Islamic State severed the road to the nearby air base earlier this week.

A military commander in the alliance of forces fighting in support of President Bashar al-Assad said Islamic State was seeking to turn Deir al-Zor city into a base of operations.

“They want to take it by force – and right now,” said the commander, a non-Syrian who declined to be identified because he is not an official spokesperson for the alliance that includes a range of Iranian-backed militias, Lebanon’s Hezbollah, and the Russian air force. “The situation in Deir al-Zor is very difficult.”

Islamic State appears focused on strengthening its hold over a triangle of Syrian territory connecting its main base of operations – Raqqa city – with Palmyra to the southwest and Deir al-Zor to the southeast.

The group seized Palmyra from government forces for a second time last month, a reversal for Assad just eight months after he had retaken control of the city and its world heritage site with the help of the Russian air force.

Islamic State fighters are also putting up stiff resistance against separate campaigns being waged against them in northern Syria, one by US-backed militias including Kurdish groups, and another by Turkish-backed Syrian rebel groups. “They are able to fight on four fronts, if they were in a state of great weakness, they would not be able to do this,” said Rami

Abdulrahman, director of the Syrian Observatory for Human Rights, a UK-based organization reporting on the war. A senior commander in the pro-Assad alliance, also a non-Syrian, said: “The strength of Daesh is that it is a cancerous tumor, and when you remove it from one place, it goes to another.”

The commander urged the US-led alliance and “every air force” to attack Islamic State to stop it moving its convoys in the Deir al-Zor area, an apparent sign of dissatisfaction with the current level of support from the Russian air force there.

Though Islamic State has faced military pressure in Deir al-Zor province, including raids by US special forces, the attacks against it there have been less intense than in other parts of its self-declared caliphate. Deir al-Zor has so far been a secondary priority for the Syrian army and its allies, which are most concerned with their battle against rebel forces in western Syria.

The US-backed campaign led by Syrian Kurdish groups has meanwhile focused on encircling and taking Raqqa city. Islamic State has been asserting itself in Syria with trademark brutality, this week killing civilians execution-style in Palmyra’s Roman Theatre, the Observatory reported.

IS has also generated headlines by blowing up more of Palmyra’s ancient ruins, with satellite imagery emerging on Friday showing the destruction of one of its most famous monuments.

Russia seized on the capture of Palmyra from Islamic State last year as evidence of its efforts against the group in Syria, after critics accused it of mostly targeting moderate rebels.

As yet there has been no sign of a major effort to take back Palmyra a second time, though the Syrian army and its allies are currently battling Islamic State to the west of the city.

If Trump follows through on suggestions that he may cooperate with Russia in the fight against Islamic State, eastern Syria would be an obvious target. This would however mark a major shift in US policy because it would help Assad.

From Nobel Peace Prize to Syria: Obama the realist

US policy under President Barack Obama was built on the idea that Assad had lost legitimacy. Obama rejected any cooperation with Assad in the fight against IS, describing his rule as part of the problem.

A Syrian official said the U.S.-led coalition was doing nothing to prevent Islamic State from moving its forces into Syria. “This is what’s helping Daesh,” the official said. “After losing Mosul, Daesh will think of reinforcing its capacity in Raqqa and Deir al-Zor because at the end of the day, they don’t have any sanctuary. The final battle will certainly be there.”