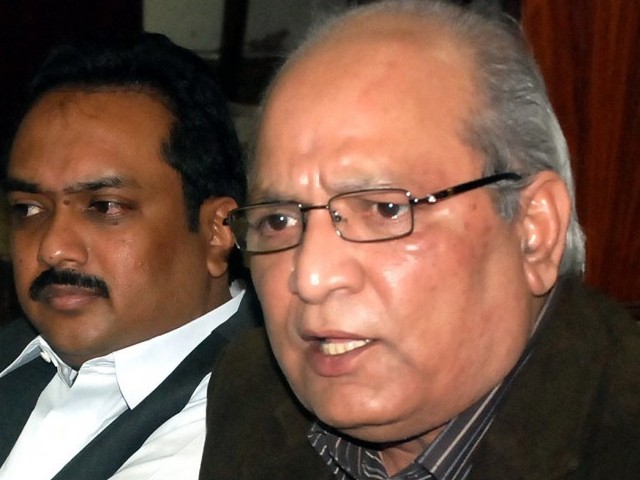 Mushahidullah Khan had to quit the portfolio of Minister for Climate Change after he claimed that ISI former chief Lt Gen Zaheerul Islam wanted to topple the PML-N government. PHOTO: INP

ISLAMABAD: The ruling PML-N is still undecided about the candidate to be appointed as Sindh’s governor as Prime Minister Nawaz Sharif’s ‘favourite’ pick for the slot may potentially affect the civil-military relations.

At a time when the crucial issues between the government and the establishment stay unresolved, the PM’s reported inclination to have the PML-N lawmaker Mushahidullah Khan elevated as Sindh’s governor may not go down well with the army given Khan’s critical views on the security establishment.

Mushahidullah Khan had to quit the portfolio of Minister for Climate Change in August 2015 after he claimed in a BBC interview that the Inter-Services Intelligence’s (ISI) former chief Lt Gen Zaheerul Islam wanted to topple the PML-N government during the PTI-PAT marathon sit-in in Islamabad in 2014.

Knowledgeable PML-N quarters believe that this is the reason why the party leadership has so far not finalised its choice for the slot and is still holding consultations on the matter.

Some sources say the PM may announce the new governor’s name after his return from Davos. However, other circles do not see an immediate announcement, saying the top leadership may take more time to make a final pick.

Even though a number of names have been considered for the said slot, the real ‘competition’ is between Khan and Khawaja Qutubuddin, another PML-N leader for whom President Mamnoon Hussain is actively lobbying, The Express Tribune has learnt.

Qutub was PML-N’s senator back in 1999 when the Nawaz’s second government was toppled by General (retd) Pervez Musharraf. However, despite Mamnoon’s lobbying, Nawaz seems less inclined to go for Qutub, as he had silently distanced himself from the party during Musharraf’s era.

Within the party, the pro- Khan lobby holds a strong position owing to his unflagging loyalty to the party and his ‘sound’ understanding of Sindh’s politics in general and Karachi’s political dynamics in particular.

“That he did not turn his back on the PML-N leadership when the party went through thick and thin during Musharraf era is a big plus for him. He is politically active and that is another valuable addition,” said PML-N leader who has a say in party’s affairs.

Moreover, he said, the party leadership is of the view that presence of an ‘active’ governor like Mushahidullah Khan in Sindh could politically benefit the party in 2018 general polls to secure some seats from the province. However, another highlyplaced PML-N member believed the pro-establishment lobby in the party is a hurdle in Khan’s appointment.

This lobby believes that the elevation of a personality who is not in establishment’s good books, to Sindh’s top slot, will end up creating problems for the PML-N.

Ailing governor named due to rift in PML-N Sindh

These leaders are of the view that party leadership has already mishandled certain issues concerning the military establishment including extension in military courts’ tenure and negative media campaign against General (retd) Raheel Sharif.

The military command has recently put its weight behind military courts and expressed its reservations over Punjab Law Minister Rana Sanaullah’s statement against military courts.

Raja Zafarul Haq said the decision on the new governor Sindh would be taken by the PM in consultation with the president, who would notify the appointment on the premier’s advice, once finalised.