In his own temple

In his own temple

In Aatish Taseer’s debut novel, The Temple-Goers, the narrat­or is named Aatish Taseer. He is estran­ged from his...
Published: May 16, 2010
Tweet Email 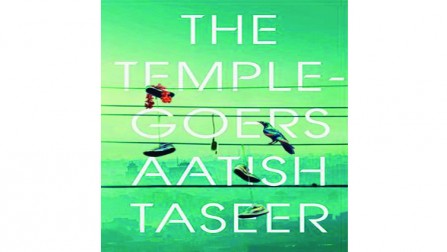 But Taseer can’t seem to let go of himself and appears in The Temple-Goers too. VS Naipaul, who described Taseer as one of the finest voices to watch out for, also makes an appearance in the novel, as — in grand Naipaulian manner — “the writer”. If we knew more about Taseer — i.e. if he was local to us — we’d be able to guess who the rest of the characters are based on. The novel, like his memoir, is ambitious in that it takes on too much and ends up doing a disservice to the subjects it’s meant to tackle.

(This was also true for Stranger to History in which countries’ rich histories were relegated to a few paragraphs but presented as clever insight into complex Muslim identities.) In The Temple-Goers Taseer wants to present modern India, with its myriad contrasts, class and caste divides, religious differences, all thrown together in a simple narrative; it is a crime-thriller filled with realms of self-actualisation, angst, romance (heterosexual and homosexual) seedy sex scenes one won’t be able to erase from memory — all of which is meant to reveal the conflict between traditional and liberal India.

Like the feel good Slumdog Millionaire was an insight into the seedy underbelly of Mumbai’s slums. This explains why The Temple-Goers has received great reviews in the British papers and why Taseer is the poster-boy of modern literary voices from the subcontinent. It’s enough to make anyone invest in a typewriter and get cracking at producing the next big subcontinental novel. As Hanif Kureishi recently said in a video interview to The Guardian, “[today] you have to be an Indian to be a writer at all”.

Strip the novel away of the proverbial sights and sounds of Delhi, complete with all the usual suspects found and heard in elite circles in the subcontinent, and you’re left with Taseer, writer and narrator, wanting to connect with ‘real India’ but is only able to do so in a perfunctory manner. Enter Aakash, a personal trainer at the gym Taseer joins, whose ‘’job’’ it is to be the author’s tour guide and friend. In the course of events, Aakash becomes a strange doppelganger to Taseer and their unlikely friendship deepens when Aakash takes Aatish to his village and later when the two visit a prostitute.

However, despite the seemingly intimate bond between the two men, the relationship is never quite explained, nor is justice meted out to the author’s strained relationship with his girlfriend Sanyogita. Her aunt though, a politician whose character is culled from various stereotypes, proves more interesting. Perhaps she would have told the story better.