A global perspective: ‘Ignorance about religion is leading to polarisation

A global perspective: ‘Ignorance about religion is leading to polarisation 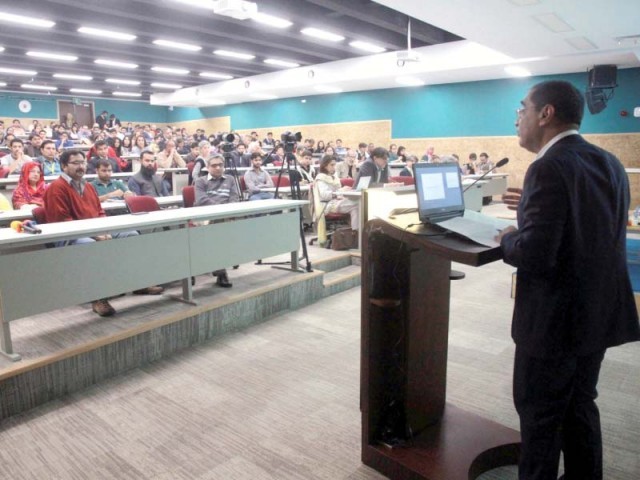 KARACHI: Da’ish, the Islamic State of Iraq and Syria and Tehreek-e-Taliban Pakistan are a modern phenomenon and a product of modernity because religious dynamics are not static, claimed Dr Ali Asani. The professor of Indo-Muslim Islamic religion and culture at Harvard University said, in global dynamics, these phenomena have no historic presence.

He was speaking about the significance of ‘Religious and Cultural Literacy in a Cosmopolitan World’ at Habib University on Friday.

Beginning his talk with the globally asked question, ‘why do they hate us?’, he said that this has been asked again and again but the polarisation in this question on who the ‘they’ and ‘us’ are remains a hot topic.

The understanding of who are the ‘they’ and ‘us’ can be arrived at on the basis of ethnicity, language, religion or even socio-economic class, he explained. Polarisation can be seen around the world but when it concerns religion it is more prominent, he said while, sharing a screenshot of a news item from CNN in which American president Donald Trump said, ‘I think Islam hates us’. In this context Islam is the ‘they’ in the global question, said Dr Asani.

Trump’s understanding of Islam shows that he feels Islam is like a person or an agency but in actuality it is a concept that only Muslims can understand, he explained. To avoid such comments on Islam, we need religious education for all, he suggested.

During his presentation he also shared a speech Russian president Vladimir Putin gave in his country’s parliament on February 4, 2013 in which he said Russia does not need minorities and when the legislative body thinks of creating new laws, it should keep national interest in mind first as the minorities are not Russian.

Terming Putin’s words harsh and a prejudicial statement, Dr Asani brought up another pertinent point, which is the inability to know each other leads to illiteracy about religions. Translating a verse from the Quran, he said, even our holy book tells us to know one another, reject differences among people and understand one another.

The notion is that in today’s world global lack of understanding about religion and culture and the inability to engage with differences is because of the lack of adequate tools to understand differences, said Dr Asani. He illustrated this point with an example of Trump’s national security adviser nominee made an irresponsible comment and said that Islam is not a religion but an ideology.

The reason for such comments is lack of religious curriculum in academia, said Dr Asani. “Awareness about religion is the need of the hour,” he added. Explaining some manifestations of religious illiteracy, he told the participants that people have made the equation of religion with devotion and therefore those practicing rituals, rites and ceremonies are considered more religious. “An entire religious community is held responsible for the actions of an individual,” he lamented, adding that such events influence how people operate all around the world.

Defining some dangers of religious illiteracy, the professor made a point that it diminishes respect for humanity and when such incidents occur, people feel excluded and the ones who feel excluded will find other frameworks to express themselves through. “If people are not educated critically about their religion they fall prey to ideologues,” he warned.