It was not immedi­ately clear what provok­ed the gunfir­e in the two cities­
By Reuters
Published: January 7, 2017
Tweet Email 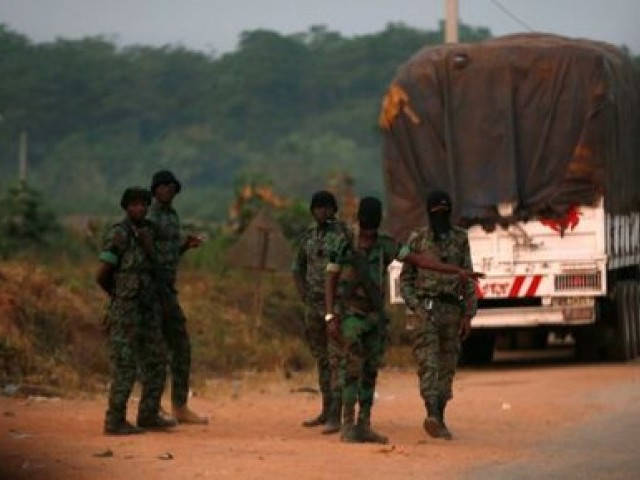 Mutinous soldiers who have taken control of Bouake stand at a checkpoint in Bouake, Ivory Coast January 6, 2017. PHOTO: REUTERS

YAMOUSSOUKRO: Heavy gunfire was heard overnight and early on Saturday near military camps in two cities in Ivory Coast, where disgruntled soldiers launched revolts a day earlier over salaries and bonuses, residents and a soldier said.

Shooting began at around 6 a.m. (0600 GMT) in Bouake, the West African nation’s second-largest city of around half a million inhabitants. Residents also reported hearing shooting throughout the night at an army base in the northern city of Korhogo.

“The shooting is very heavy right now at the 3rd Battalion. I’m nearby and I hear it like it was right next to us,” Bouake resident Konan Benoit told Reuters by telephone as gunfire could be heard on the line.

Zie Silue, who lives in Korhogo, said the gunfire there had stopped by the early morning. “It’s calm now, but residents are being careful. There’s practically no traffic. Shops are closed,” he said.

Ivory Coast – French-speaking West Africa’s largest economy – has emerged from a 2002-11 political crisis as one of the continent’s rising economic stars.

However, the years of conflict and a failure to reform its army, thrown together from a mixture of former rebel fighters and government soldiers, have left it with an unruly force hobbled by internal divisions.

Renegade soldiers seized Bouake early on Friday after taking up positions at key entry points, beginning a standoff with troop reinforcements sent there after word of the revolt reached the army headquarters in the commercial capital Abidjan.

It was not immediately clear what provoked the gunfire in the two cities, but a member of the uprising said soldiers in Bouake had seen what they considered suspicious movements outside the camp.

“This is gunfire (by the renegades) to discourage them,” he said.

While the shooting later died down, intermittent bursts of gunfire continued.

A Reuters reporter, who entered Bouake late on Friday and met some of the mutineers, said they were composed of low-ranking soldiers but also included some demobilized combatants.

Nearly all appeared to be former members of the New Forces rebellion, which had used Bouake as its de facto capital and controlled the northern half of Ivory Coast from 2002 until the country was reunited following a 2011 civil war.

Defence Minister Alain-Richard Donwahi in a statement late on Friday called for calm and said the government was prepared to listen to the soldiers’ grievances after the uprising spread to other cities including Daloa, Daoukro and Odienne.

Calling the revolt “understandable but deplorable for the image of the country”, he said he would travel to Bouake on Saturday to speak directly with the mutineers.

Bema Fofana, a parliament member representing Bouake, said the soldiers had agreed in a meeting late on Friday to return to barracks from 6 a.m. on Saturday. But a local journalist in Bouake said that, hours later, the situation on the streets had not changed.

“They are maintaining their positions. They are still at the entrances to the city and at the central roundabout,” the journalist said, asking that his name not be used due to fear of reprisal.

Toll rises to 43 in car bombing in Syria’s Azaz