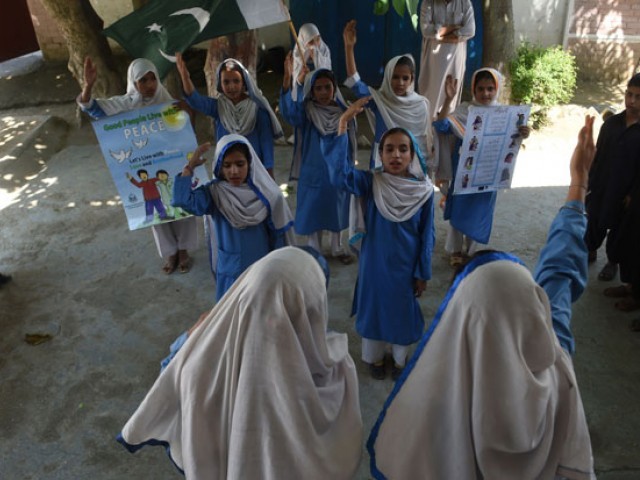 In this photograph taken on August 30, 2016, Hindko speaking schoolchildren sing the national anthem at their school in Mansehra. Around a hundred women have gathered in a community centre in Peshawar, the heart of Pakistan's fabled northwest -- but they are conversing in a dialect incomprehensible to the Pashtun ethnic group that dominates the region. PHOTO: AFP

Around a hundred women have gathered in a community centre in Peshawar, the heart of Pakistan’s fabled northwest — but they are conversing in a dialect incomprehensible to the Pashtun ethnic group that dominates the region.

Instead they are exchanging anecdotes and ideas in their native Hindko (literally, “the language of India”) at a conference organised to promote the increasingly marginalised language.

This is the language most Pakistanis want to learn

Pakistan’s 200 million people speak 72 provincial and regional tongues, including official languages Urdu and English, according to a 2014 parliamentary paper on the subject that classed 10 as either “in trouble” or “near extinction”. 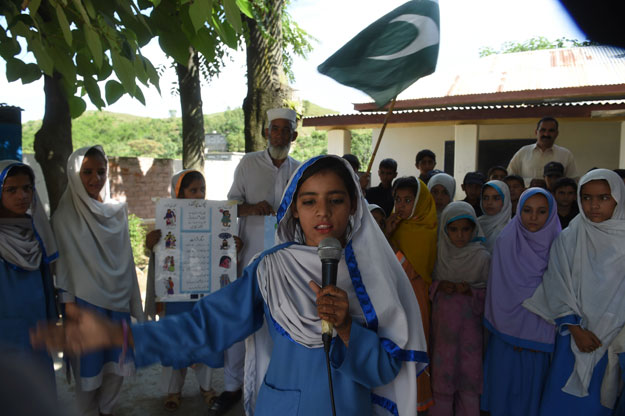 In this photograph, Hindko speaking schoolchildren sing the national anthem at their school in Mansehra. PHOTO: AFP

According to scholars, Hindko’s decline as the foremost language of Peshawar city began in 1947 when Hindu and Sikh traders left the city after the partition of British India.

Known for its curious aphorisms such as “Kehni aan dhiye nu, nuen kan dhar” (“I’m talking to my daughter, my daughter-in-law should listen”) — which is meant to convey a harsh message but indirectly), it only has some two million speakers across Pakistan as opposed to Pashto’s 26 million.

It has also become a minority language in the city of its birth.

“Years and years of political unrest in Pakistan’s northwestern region and Afghanistan have adversely impacted our language and it has lost grounds to Pashto,” Salahudin, Chief Executive of the Gandhara Hindko Board which organised the event, explained.

Some three million mainly Pashto speakers fled war from neighbouring Afghanistan over the past 35 years, while others are more recent migrants from other parts of Khyber Pakhtunkwa province.

The most endangered of Pakistan’s dialects are now spoken by only a few hundred people, such as Domaaki, an Indo-Aryan langauges confined to a handful of villages in remote northern Gilgit-Baltistan.

Even regional languages spoken by tens of millions like Sindhi and Punjabi are no longer as vigorous as they once were.

“There is not a single newspaper or magazine published in Punjabi for the 60 million-plus Punjabi speakers,” wrote journalist Abbas Zaidi in an essay, despite it being the language of the nationally revered Sufi poet Bulleh Shah and the native-tongue of Prime Minister Nawaz Sharif.

English has been seen as the language of the elite in Pakistan since the country was founded.

It is used at the highest official levels, despite the fact this excludes the majority of Pakistanis — many of whom, as a consequence of low literacy rates, do not speak English well or at all, according to leading linguist Tariq Rahman.

Urdu, the most common national tongue and spoken as a second language by the majority of Pakistanis, has been relegated to the middle- and lower-level halls of power, while the widely spoken regional languages — usually native to their speakers — are not even taught in schools.

“The result is an underclass that remains out of any public policy making, its upward mobility increasingly limited, and harbouring a deep sense of inferiority,” wrote Urdu poet Harris Khalique in a research paper.

“A majority of Pakistanis is unable to recognise car registration plates, many road signs that are only in English, the signboards of shops and offices.” 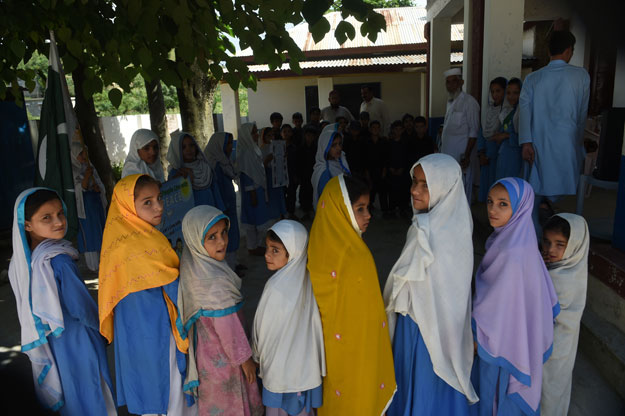 Around a hundred women have gathered in a community centre in Peshawar, the heart of Pakistan’s fabled northwest — but they are conversing in a dialect incomprehensible to the Pashtun ethnic group that dominates the region. PHOTO AFP

Some language activists have taken a stand, such as Rozi Khan Baraki, a champion of the Urmari language of South Waziristan tribal zone that claims some 50,000 speakers.

At its peak in the early 16th century, the language flourished across much of Afghanistan and what is now northwest Pakistan.

“But then people in [the area] began speaking Pashto and Persian because many of the speakers of those languages migrated to the fertile lands of this region.

“Migrations have also threatened our next generation, who being Internally Displaced People (IDPs) in Dera Ismail Khan, Peshawar, and Karachi have stopped communicating in their mother tongue.”

Baraki said to avoid extinction, community elders have asked their people to “force their children to speak Urmari at homes, especially those who have married women who speak other languages”.

“Our next generation is threatened, this language is going to die if we don’t preserve it today,” he said.

Rahman lauds such efforts but says the process of saving dying languages can only happen when it is taken up at a governmental level as was the case with Welsh, a regional language of Britain.

A loss of diversity can have lasting ill effects, he warns.

Those who shift from their mother tongue to assimilate “try to become clones of another group — the one which they want to imitate, and lose respect for their former group,” he said.

Children find it difficult to communicate to their elders, while folk stories and music can also fade from memory.

“There are names of herbs and local names for fruit and animals that are lost. In some cases when you lose the name of the herb the use is also forgotten,” he said.