Writer­s, poets from India may not partic­ipate this time
By Our Correspondent
Published: November 30, 2016
Tweet Email 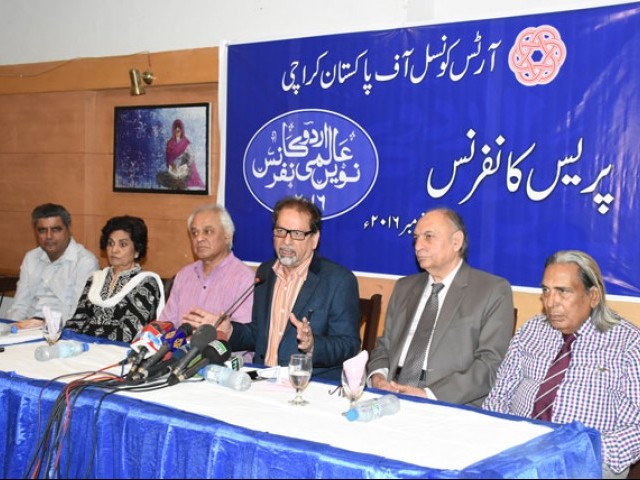 KARACHI: Writers, poets and critics of Urdu from India may not participate in the Aalami Urdu Conference that will begin tomorrow (Thursday).

Former Arts Council of Pakistan, Karachi, secretary Ahmed Shah said that due to Pakistan-centric policies of the Modi government, the literary audience from India is unable to grace the ninth International Urdu Conference being held from December 1 to December 4.

He was addressing a press conference held at the Arts Council Tuesday afternoon.

They will be physically absent but we will arrange for their presence on video or audio link during the conference, he said.

Criticising the Indian government for harassment of artists and intellectuals who wished to participate in the conference, Shah said that culture, arts and literature have no boundaries.

“War itself is a problem and it can never be a solution to the issues between us,” said Shah. “Artists and open-minded people discourage fanaticism in both countries.” He added that the annual Urdu conference is one of the most important arts and literature events in the world. He termed the conference as a ‘historical gathering’ of various people from across the world.

It is our aim to promote the Urdu language and inform people of the developments in the language, said Shah. It’s necessary to promote arts, literature, language and cultural events for a soft image of Pakistan, he said, adding that the Urdu conference has now been happening in 27 cities of Pakistan.

Apart from being a platform where people will develop a love for the Urdu language, the four-day conference will help PhD, MPhil students and various other researchers, remarked Shah, adding that 50 international and 150 local writers, poets, critics and intellectuals will be attending the conference.