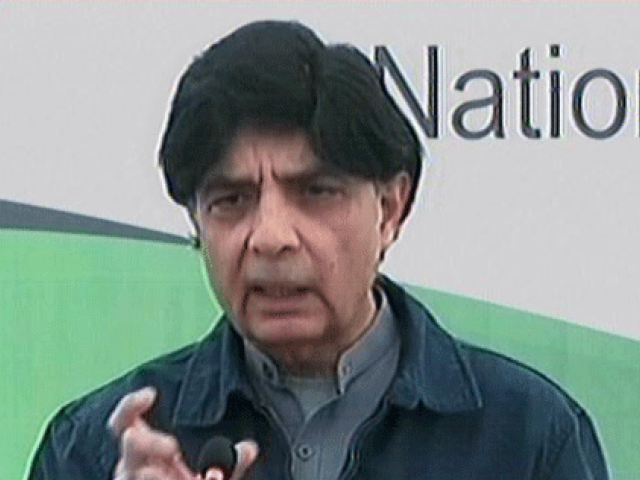 “As you already know that a senior officer who was leading the prosecution of the case earlier has been ailing since last three months therefore I will constitute another committee for prosecution,” Nisar told media men in Islamabad on Friday.

Taking a veiled jibe at Pakistan Peoples Party (PPP)’s leadership, the country’s security czar said law would take its due course against corruption even if he was subjected to personal attacks or a “hue and cry” was raised.

On the issue of CNIC verification, the interior minister said: “I am about to constitute a 19-member committee, as earlier announced in the National Assembly, which will oversee the issue of ID cards being blocked and it will be submitted a report on monthly basis by Nadra.”

Nisar further said that the interior ministry was formulating a standard operating procedure (SOP) to allow the masses, whose identity cards have been blocked, to have their ID cards reissued. “This will include producing endorsed record of any property held prior to 1978, domicile, local certificate or family certificate issued by the local administration or certificate of employment in Pakistan.”

Earlier, the interior minister claimed that the ministry had successfully completed the CNIC verification process within a short period of six months. “We faced a lot of difficulties in verification of the CNICs and I want to thank all the sincere officials of Nadra who took this uphill task and completed it within six months,” he said.

Delving into the details of the verification process, Nisar said 95 million illegal SIMs were blocked in the period of 90 days. “A total of 0.45 million CNICs were blocked during the last four years of the current government as compared to 519 which were blocked by the previous regime,” he said.