KARACHI: How would you define home?  A place you have never seen before or a place you saw once, long ago? A place you hoped you would understand better but never did?

Ansh Ranvir Vohra and Avani Tandon Vieira has let the barriers fall as far as Indo-Pak rivalry is concerned by launching an online portal in August, 2016, of short stories and poems on the concept of home titled ‘The Pind Collective’.

From baby steps to building bridges

“I had the opportunity to travel to Pakistan a few years ago and it was an incredible experience, particularly because of the people it gave me an opportunity to meet,” said Vieira. “After I returned to India, it became glaringly clear that had I not physically crossed the border, I would never have had a chance to meet these young people, even though we had so much in common,” she explained. “For most of my friends in India, this would continue to be true – there simply aren’t any platforms that help young people in India and Pakistan connect. This prompted me to think about what I could do to help build those bridges,” lamented Vieira.

“Art has always been a major part of my life – I am a student of literature and the daughter of a designer – and I realised that a collaborative art platform would be a powerful way to start a conversation. Work on the Collective began over a year ago and we’ve managed to create a thriving community that we are very proud of.”

Vohra said Vieira and his friendship developed a few months ago and she had looked at some of his work. “I’d been following a bunch of her initiatives too. So when she offered me a spot on the Collective I immediately took it,” he explained.

“For a long time, I’ve felt that art in isolation begins to lose relevance and at some point, ends up being reduced to an indulgence. So it’s extremely important to work in conjunction with an active community of artists and audiences, to ensure a healthy exchange of ideas and experiences,” explained Vohra. “To have the opportunity to do that, especially with such a wide range of practitioners from Pakistan and India, was one I felt I shouldn’t let go of. It’s given me the opportunity to reflect on my identity as a contemporary citizen of a nation with a stormy history,” he said.  “I think what I am most pained and troubled by is the violence that followed partition and the failure of both governments to protect their people. 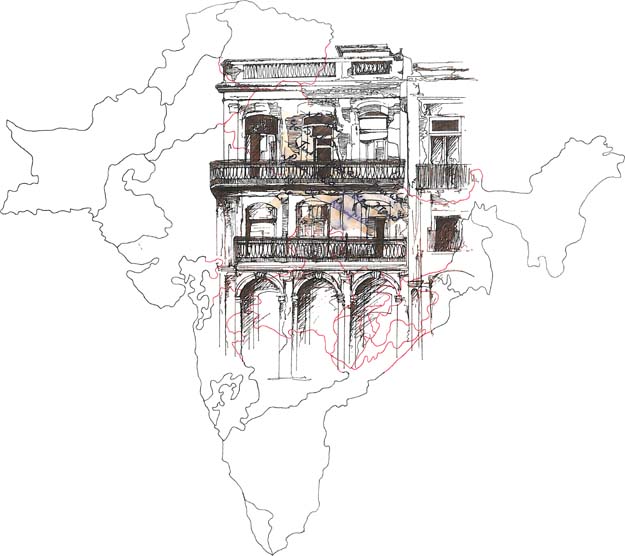 These are wounds that do not heal easily and for many families, they are wounds that they will carry for generations,” explained Vieira. “It is incredibly important to listen to their stories, to offer them the opportunity to remember and share. This will not, of course, remove their suffering, but it is a duty we owe to them,” she said.

“Three generations have lived through a collective memory of violence and hatred. The first step, as Avani puts it, has been to allow those voices to exist within a democratic space and for healthy conversations around them to begin,” said Vohra. The next step, once we have started to acknowledge and process the pain that comes with it, is to begin moving on, he added.

“While partition is and always will be an important part of our history it cannot continue to define our identities, opinions and relationships. We must, like old friends after a scuffle, initiate the process of conciliation,” he explained. The theme of the first series of the Pind Collective is home. “I think the theme we picked was one that our artists responded very well to.

It’s a meaningful idea and they really tapped into some very personal spaces to create their pieces,” explained Vieira. This is what our collective aims to do – create moments of connection for people from across both the nations, she said. Through the project, Vieira and Vohra aim to create a platform through which younger people can respond to what surrounds them. “The idea is to move beyond inherited biases – to react to moments and struggles in our capacity as individuals and not merely as an echo of what older generations believe,” said Vieira.

The project has generated a lot of interest not just in the creators’ own social circles, but beyond that as well.

“We were able to reach out to 67,000 people across borders within a month of our launch and initiate some extremely interesting conversations, some of them existing even outside the confines of the collective,” said Vieira.