The beginning of the end for John Cena

The beginning of the end for John Cena

Last couple of years have seen Cena work a limite­d schedu­le while he recove­red from injuri­es
By Rahul Aijaz
Published: December 24, 2016
Tweet Email 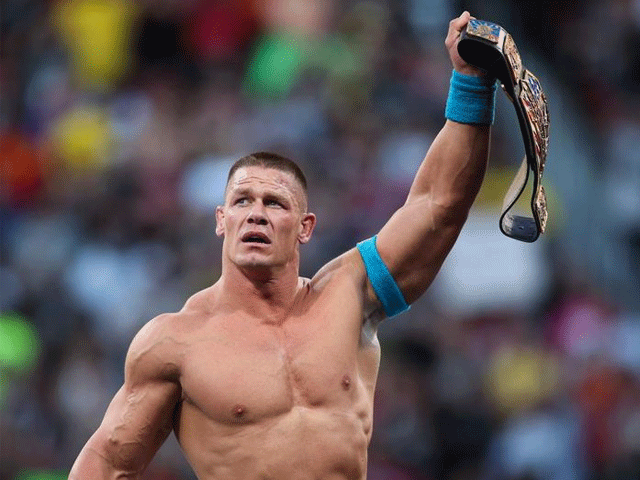 The name John Cena is familiar for everyone, pro wrestling fan or not. Cena has been the top dog in the industry for 12 long years, accumulating dozens of championships and making and breaking records all over. While he has been the main event attraction the longest of any superstar in recent history, it all had to come to an end someday. And that someday appears to be quite near, as he gradually makes his way into Hollywood.

The last couple of years have seen Cena work a limited schedule while he recovered from injuries or participated in projects outside WWE. From appearing in a film Trainwreck with comedian Amy Schumer to recently hosting Saturday Night Live, the 15-time world champion has become noticeable and accepted in the mainstream media.

The slow transition from professional wrestling to acting is quite ironic as during the two-year long feud between Cena and Dwayne ‘The Rock’ Johnson, he often mocked the Furious 7 star for not staying true to his wrestling roots. Less than half a decade later and Cena’s WWE career seems to be winding down and he is on the same route as The Rock.

It’s not that he is leaving WWE as soon as next month. However, 2016 witnessed Cena work vastly reduced dates. He was out with an injury at the beginning of the year and didn’t wrestle a match at Royal Rumble, Wrestlemania 32 and Survivor Series, three of the Big Four shows of the year. In between, he left to shoot the first season of television show American Grit, and he’s currently on another hiatus to shoot its second season.

According to Bleacher Report, he only wrestled 12 televised and pay-per-view matches and 45 overall (including live events) this year, which is a fraction of his prior full-time yearly schedule. While Cena returns to Smackdown Live on December 27, it is rest assured not for the long term, as he has signed a comedy film The Pact, alongside Leslie Mann and Ike Barinholtz. Hollywood doors are wide open for the megastar and with projects lining up for him, one can never say when he takes another break from the company that made him a household name.

Cena is now the same attraction as The Undertaker or Brock Lesnar returning to boost ratings and help storylines. Interestingly, even when he is not the number one guy anymore, Cena still hopes to make one record on his way out. He only needs one more world title reign to tie Ric Flair’s 16 reigns. While that would put him in the history books, not winning it would not take away anything from his accomplishments as he is still a surefire future WWE Hall of Famer.

While WWE may be on the verge of losing a megastar in near future, it still has had one positive effect. Due to Cena’s absence, the company has put more efforts in finding a replacement for the top guy position. WWE has been trying to establish more stars, who would otherwise be relegated to second-tier spots in Cena’s presence. Wrestlers such as AJ Styles, Dean Ambrose, The Miz and Dolph Ziggler have been carrying Smackdown Live on their shoulders since the brand split in July.

5 ways WWE is similar to Bollywood

What is even more interesting is that with Cena, a cash cow for the WWE and generally a ratings booster, being away, the Smackdown Live’s ratings have increased and now are closing in on the flagship show RAW’s ratings. One factor is definitely the brand split but it remains to be seen how the WWE eventually replaces him with new megastars when Cena finally decides to hang up his boots.