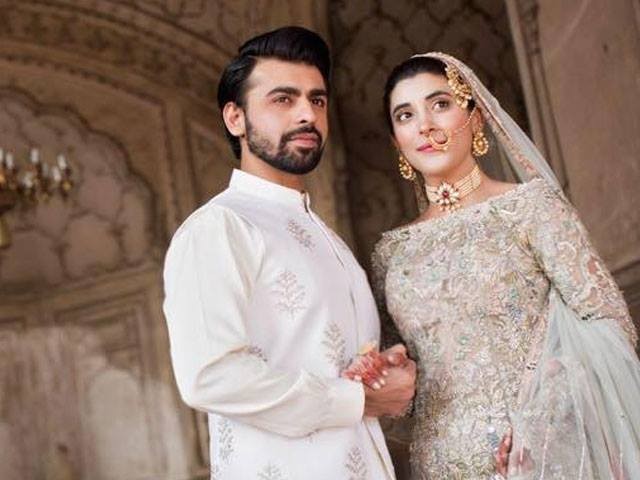 The power couple’s relationship has been making headlines for quite some time and the two finally sealed their vows at the Badshahi Mosque in Lahore.

Urwa’s sister Mawra Hocane shared a few pictures from the nikkah event, as the family rejoiced.

Mawra was all dolled up in a turquoise blue dress.

Never apart. May be in Distance but never at Heart ⚡️ @urwatistic #UrwaFarhan ✨ #MyBabyBride #Nikkah #Hitched

Wearing an Elan ensemble and sporting accessories by Sheherzad, Urwa was a vision. The beautiful bride was styled by Nabila salon. Farhan boasted a traditional avatar and looked dapper as ever in a white sherwani.

The news of the pair being engaged created quite a frenzy last month when Farhan shared an Instagram post of Urwa holding his hand in Paris while wearing an engagement ring. The photo was very aptly captioned, “She said YESS!”

Beautiful couple @urwatistic and @farhan_saeed at their Nikkah this morning at the historic Badshahi Mosque in Lahore as they wed in a private and intimate ceremony. #Urwa and #Farhan both wore bespoke @elanofficial with Urwa's jewellery by #Sherezad and make up by #Nabila @nabila_salon. #UrwaFarhan

In a previous interview with The Express Tribune, the singer opened up about his relationship with the Udaari star.

“We are together and everyone knows about it. We have confessed it earlier on social media as well, so it is not a rumour but a reality.”

The two have worked in a number of projects together, including the super-hit drama Udaari and Mere Ajnabi.

Congratulations to the newly weds!