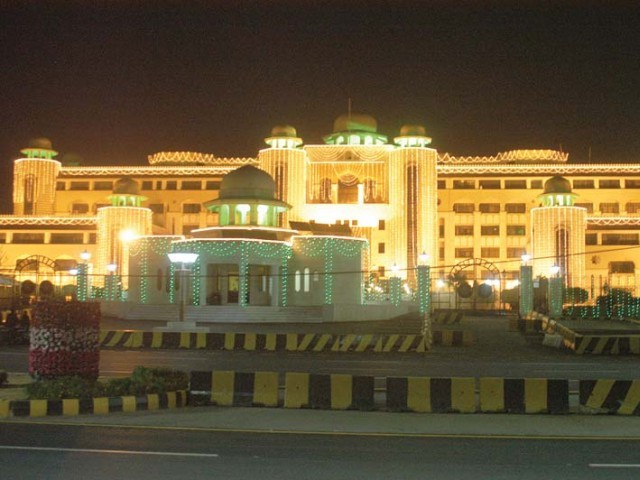 A street and a building in Rawalpindi are covered with bright lights, while the Prime Minister’s Secretariat is illuminated on the eve of Eid Miladun Nabi. PHOTOS: EXPRESS

RAWALPINDI: From afar, it seems like the city is radiating, like a pulse showing that the city is alive.

On closer inspection, one can see how ‘pulse’ emanates from the different coloured  lights which have been put up in Rawalpindi for Rabiul Awwal 12.

The garrison city is set to celebrate Eid Miladun Nabi today with people decorating  their houses and mosques with colourful lights, flags and billboards.

On the eve of Rabiul Awwal 12, sounds of naats and hymns rang out from Milads held in private gatherings or at mosques on Sunday evening.

In the evening, people thronged the markets. But most were not there for shopping, rather, they wanted to see the sparkling lights illuminating the markets. 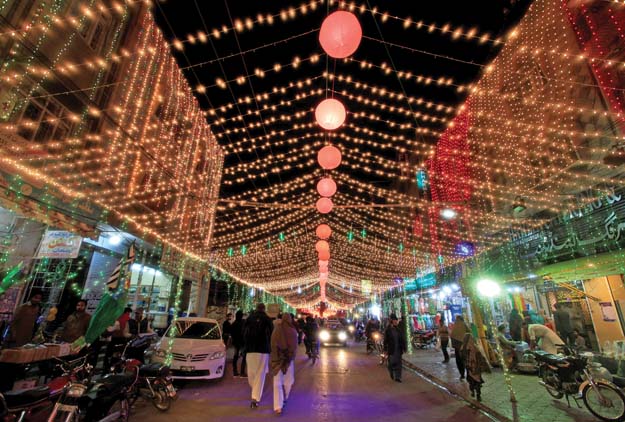 “We have come with our children to watch the lights and the hustle and bustle in the markets,” said Bilal Khan, a resident of Tench Bhatta.

“The children were quite eager to see the decorated buildings, plazas, markets, and houses.”

Gulzar Butt, a resident of Ratta Amral, said that the local market was the most beautifully decorated place in the city. He explained that locals in collaboration with Milad committees had pooled in money to decorate their market. He added that they would also organise a naat competition at night in the market.

Many people had decorated their houses with colourful lights as well.

“The children are very happy to see their houses decorated [with lights] and are enjoying every bit of it”, said Zaffar Iqbal, a resident of Dheri Hassanabad. He noted that people often decorate their houses on the eve of Eid Miladun Nabi under pressure from their children.

Further, people made arrangements for Mehfil-e-Milad in their area mosques on Sunday night. At the gatherings, they recited naats while religious scholars delivered sermons and lectures to highlight the teachings and life of Prophet Muhammad (PBUH).

On Monday, the area Milad committee would hold processions marching through various thoroughfares and reciting naats. The procession participants would be offered food and drinks through stalls set up by people on the roadsides. 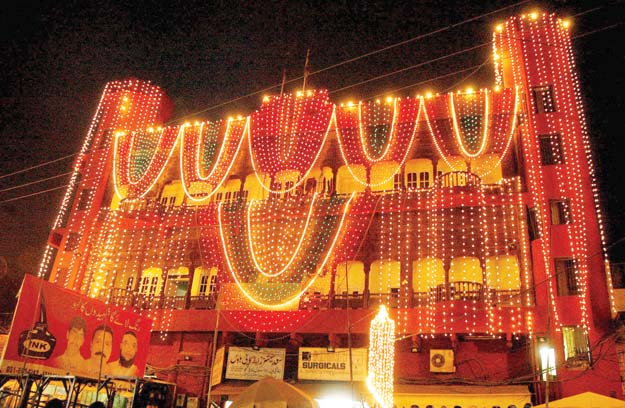 Traffic on major roads will be diverted onto side roads to facilitate the processions. The police spokesperson said that motorists can get more details of the plan from www.facebook.com/ctprwp.