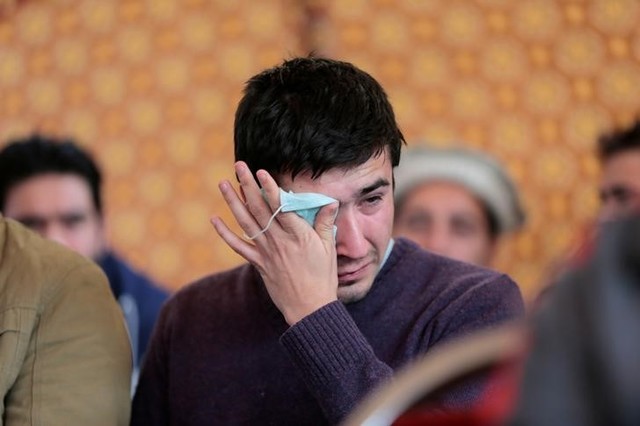 Relatives grieve as they wait for word on the collection of the remains of victims of the Pakistan International Airlines (PIA) plane crash at PIMS hospital in Islamabad, Pakistan December 8, 2016. PHOTO: REUTERS

ABBOTTABAD: “I could hear screams of survivors for help. They were faint, but clearly audible from afar. Before we could reach the mangled plane, it burst into a fireball,” recalls villager Zahid Khan, who was the first to reach the site where PIA’s flight PK-661 crashed en route to Islamabad from Chitral on Wednesday.

All 48 people on board ATR-42 aircraft including three foreigners and pop star-turned-evangelist Junaid Jamshed were killed when it went down in the hills of Gagan, in Batolni village of Abbottabad district.

“The plane circled over our village at a menacingly low altitude before nose-diving into the hills of Gagan in the neighbouring Batolni village,” says Zahid, a police constable and resident of Mujahth village.

“Moments before the crash, the emergency exit of the plane opened and eight to nine passengers jumped off, but unfortunately, the plane fell on them,” claims Zahid who is posted at the office of District Police Officer in Abbottabad.

“I was chasing the plane on my motorcycle and called my friends by cellphone when it went down,” Zahid says. “I was the first person to reach the site nearly 10 minutes after the crash. The fuselage was split into three parts and there was fire on two parts. I could clearly hear cries of passengers for help,” claims Zahid. “Before I could do something, the fuel tank exploded and the fuselage burst into a fireball.”

Soon he was joined by other villagers. They carried pitchers filled with water, bags full of sand and soil, and started dousing the fire. “They fought the flames valiantly and put out the blaze,” Zahid recalls. “More than 40 young men from the two villages received burn injuries while dousing the fire.”

The villagers managed to extinguish the fire within two hours before the police reached the site to launch a rescue operation. “By that time, however, all the bodies were charred beyond recognition,” says Zahid contesting the official claims that bodies of six of the victims have been identified without DNA tests.

“All the bodies were mutilated – and burned to a cinder. We collected them in pieces. Except for half the face of the pilot, there was nothing identifiable with the naked eye,” he says.

It was Zahid who had found the wallet of Junaid Jamshed with Rs5,000 to 6,000 cash and visiting cards inside. The national identity card of the ex-pop star-turned evangelist was found in the half-burnt handbag of his wife. “I handed these things to DSP Khursheed Tanoli and told him that Junaid Jamshed and his wife were also aboard the plane,” says Zahid. “I had also found the CNIC of Chitral’s district commissioner Osama Ahmed Warriach.”

Zahid is all praise for the pilot who, according to him, saved the plane from falling on the villages of Mujahth and Batolni. “Had the aircraft crashed on the populated area, then the death toll would have been much higher,” he adds.

SHO Havelian Pervez Khan says DSP Tanoli, along with a police contingent, reached the site within 30 minutes of the crash. He corroborates what Zahid said in his account. ”Villagers in Mujahth and Batolni could see the plane from the rooftops of their homes. And after it crashed, all villagers, including women rushed to the site to help with rescue efforts,” says Pervez.

The SHO also quotes another eyewitness, a forest guard, as saying that some passengers jumped off the plane through the emergency exit seconds before it came down. “Unfortunately, the plane fell on them burying them under the debris.”