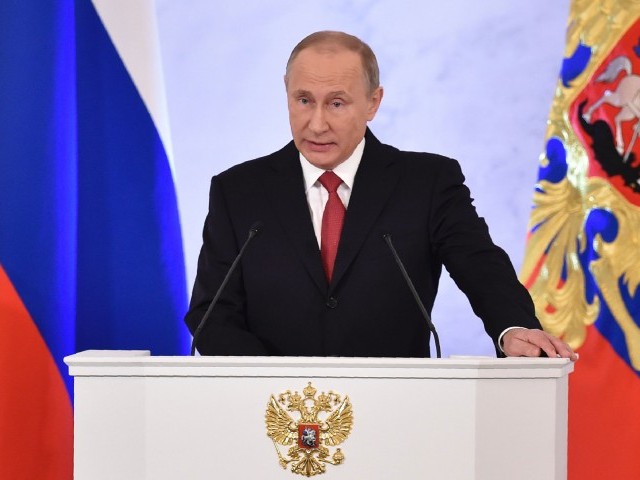 Russian President Vladimir Putin addresses the Federal Assembly of both houses of parliament at the Kremlin in Moscow on December 1, 2016. PHOTO: AFP

MOSCOW: President Vladimir Putin adopted a conciliatory tone to international rivals in a key speech on Thursday, saying Russia has “never looked for enemies” in the international community.

“We do not want confrontation with anyone. It is not needed — not by us, our partners, the international community,” Putin said during an address on the state of the nation.

“As opposed to some of our foreign colleagues who view Russia as an adversary, we are not looking, and have never looked, for enemies. We need friends.”

In a pointed aside, Kremlin strongman added that Russia would nevertheless “not allow its interests to be infringed upon.”

Russia finds itself locked in its worst standoff with the West since the Cold War over its 2014 annexation of Crimea, the conflict in Ukraine and lingering disagreements about the conflict in Syria.

Putin on Thursday reiterated Moscow’s readiness to work with Donald Trump’s administration once the president-elect takes office in January.

“It is important to normalise and start to develop bilateral relations on an equal and mutually-beneficial basis,” Putin said.

“We have a collective responsibility to ensure international security and stability.”

He added that attempts to disrupt this “strategic parity” are “extremely dangerous and can lead to a global catastrophe.”

Putin also called on Russia to remain united to thwart any internal political conflicts that could destabilise the state.

“Recently we have seen many countries in which this situation has paved the way to opportunists, coups and ultimately anarchy,” Putin said.

“The result everywhere is the same: human tragedies and victims, decay and ruin, disappointment.”

Putin says Russia does not seek confrontation with US

Putin also called on Russians to ponder their turbulent history — including the 1917 February and October revolutions that saw the Bolsheviks seize power — to learn lessons from the past that could help prevent a similar scenario in modern Russia.

“We need the lessons of history first of all for the reconciliation, the strengthening of the social, political and civil harmony we have reached today,” he said.

“It is unacceptable to hold on to the rifts and rancour, resentment and bitterness of the past in today’s life.”

The Kremlin has repeatedly warned against so-called colour revolutions, the name given to pro-Western movements seen in some former Soviet republics over the last several years, which Moscow believes were fomented by the United States.

Nokia ready for smartphone comeback in 2017