Off-spinne­r can bowl once more after test result­s leave him in the clear
By Our Correspondent
Published: December 1, 2016
Tweet Email 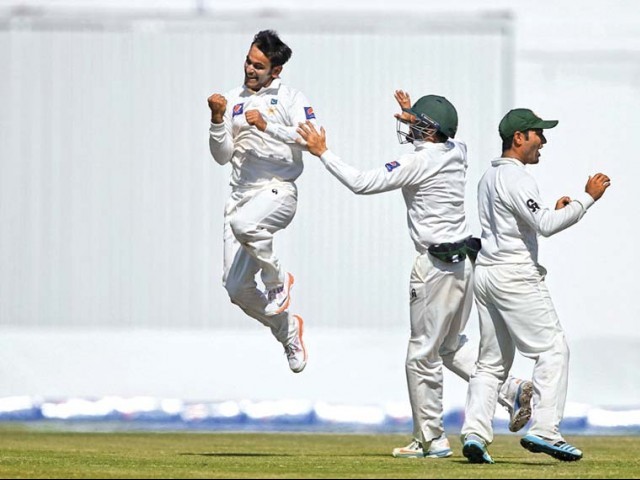 Hafeez has been cleared by the ICC to resume bowling, but the umpires would be free to report him if they suspect his action exceeds the permissible 15-degree limit during matches. PHOTO COURTESY: GETTY

KARACHI: Muhammad Hafeez is an all-rounder once again after the International Cricket Council (ICC) allowed the seasoned cricketer to bowl after he cleared his bowling-action test.

The ICC announced yesterday that the bowling action of the off-spinner was found to be legal during his biomechanics test in Brisbane on November 17, meaning he can resume bowling in international cricket with immediate effect.

“It was revealed that the amount of elbow extension for all his off-spin deliveries was within the 15-degree level of tolerance permitted under the ICC regulations for the review of bowlers reported with suspected illegal bowling actions,” read an ICC statement.

The governing body, however, added that umpires will be free to report Hafeez “if they believe he is displaying a suspect action and not reproducing the legal action from the reassessment”.

The all-rounder was first suspended from bowling in November 2014 and was permitted to bowl in April last year after clearing his reassessment.

However, he was once again reported during the Galle Test against Sri Lanka in June 2015. Subsequently, Hafeez was suspended from bowling for 12 months in July 2015 — for being reported for an illegal bowling action for the second time in 24 months.

“If he is reported again, he will be required to undertake further analysis of his bowling action at an ICC accredited testing centre,” added the ICC.

The 36-year-old was an automatic choice in the team before he was reported for a suspect bowling action and had made the top rank in the ICC’s all-rounder rankings his own.

Hafeez was retained in the side as a batsman following his bowling ban but failed to convince with the bat and was dropped from the squad following the tour of England earlier this year.

Subsequently, he was overlooked for the series against the West Indies in the UAE and the tour of New Zealand.

Pakistan Cricket Board (PCB) Chairman Shaharyar Khan had recently stated that it will be difficult to include Hafeez in the team just as a batsman and the development on his bowling test has delighted the all-rounder.

“I am happy to resume bowling,” he said after clearing his test. “I will work hard to become the number one all-rounder again.”

Clearance a plus for Hafeez: selector

“It’s a breakthrough for Hafeez,” Tauseef told The Express Tribune. “Hafeez was one of the top all-rounders in the world and we are hopeful that he will regain the same status again.”

Hafeez, along with Kamran Akmal, was in contention for the upcoming three-Test series against Australia before the selection committee decided to stick with the squad, which toured New Zealand for two Test matches.

“The squad has already been announced and it will remain unchanged until the team management needs a replacement,” he said. “In the meanwhile, the selection committee will closely monitor Hafeez’s performances in domestic cricket.”