Against New Zealand A: Pakistan likely to field strong batting side

Against New Zealand A: Pakistan likely to field strong batting side

Condit­ions alien to most batsme­n in side as tough challe­nge expect­ed
By Our Correspondent
Published: November 10, 2016
Tweet Email 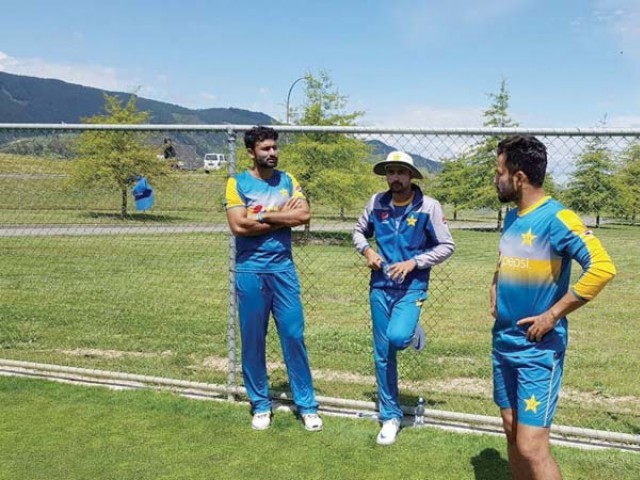 Pakistan concentrated on their batting in the nets as the batsmen will be forced to perform in alien conditions in New Zealand. PHOTO COURTESY: PCB

KARACHI: The team management wants to take full advantage of their solitary practice match ahead of a tough Test series against New Zealand, and have decided to field their best batting line-up for the three-day clash starting in Nelson tomorrow.

Misbahul Haq’s men will face New Zealand A, led by Kiwi batsman Henry Nicholls, ahead of the two-match series. The first Test will start in Christchurch from November 17 while the second game will be played in Hamilton from November 25.

Pakistan reached New Zealand on November 5 after a marathon 45-day series against the West Indies in the UAE, which came on the back of a long England tour. However, most of the first-team batsmen will take to the field rather than be afforded a rest.

“The batsmen have little time to acclimatise with the playing conditions, which are totally different from that of the UAE,” a Pakistan Cricket Board (PCB) official told The Express Tribune. “Coach Mickey Arthur wants the best players to play in the three-day match, especially the batsmen as they need practice on these pitches. Selection in the bowling line-up is not much of a concern since Pakistan have variety in their pace attack.”

The team underwent an extensive practice session yesterday, with the batting being the main focus.

“It was the third consecutive day that the team had a busy practice session,” added the official. “Sessions in bowling, fielding and batting were held under the supervision of the coaches. The batsmen especially had another busy day in the nets.”

Pakistan’s capacity to deal with bouncy pitches was questioned by several former cricketers after they struggled against West Indies’ pace attack in the Sharjah Test and they are looking to address the issue quickly.

NZ squad for first Test likely to be announced today

According to a report, New Zealand are expected to announce their 13-man squad for the Christchurch Test today.

New Zealand opener Martin Guptill is likely to be axed after performing poorly in the recent Test series in India.

Auckland’s Jeet Raval is tipped to open the innings with Tom Latham, while leg-spinner Todd Astle is also likely to be named in the squad.