The Indian capita­l has been shroud­ed in a toxic soup as pollut­ion levels spiked after Diwali­
By AFP
Published: November 8, 2016
Tweet Email 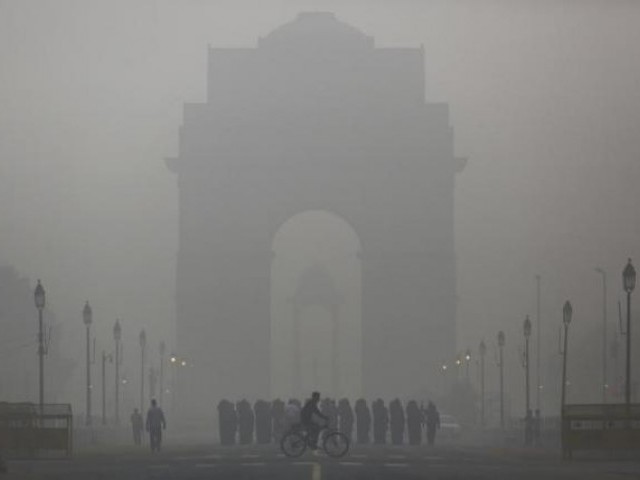 A man rides his bicycle next to Indian soldiers marching in front of India Gate on a smoggy morning in New Delhi, India, December 1, 2015. PHOTO: REUTERS

NEW DELHI: India’s top court on Tuesday gave the federal government two days to chalk out a plan to tackle alarming levels of smog in Delhi, the world’s most polluted capital.

An environmental body filed a petition with the Supreme Court earlier this week demanding a review of the government’s previous lacklustre attempts to control the pollution levels, describing it as a “public health emergency”.

Delhi has been shrouded in a toxic soup in recent days as pollution levels spiked after the Diwali festival which is marked by setting off ear-splitting – and highly polluting – fireworks.

The air quality generally worsens with the onset of winter, as farmers in neighbouring states burn crop stubble after the harvest and cooler temperatures trap pollutants in a smoggy haze over the city.

Schools to shut as Delhi chokes on pollution

The government on Tuesday asked the court for two days to come up with a plan, which was granted.

“Give me two days. We will have a meeting with the environment secretary and come up with a comprehensive response to the problem of Delhi pollution,” India’s solicitor general, Ranjit Kumar, told the court.

On Tuesday morning, the US embassy showed the concentration of PM2.5 – the fine particles linked to higher rates of chronic bronchitis, lung cancer and heart disease – at a “hazardous” level of 372, lower than Monday’s off-the-charts reading of 778.

Levels between 301 and 500 are classified as “hazardous”, meaning everyone faces a risk of respiratory effects and should stay indoors, while levels above 500 are beyond the official index.

In a separate hearing in India’s environment court on Tuesday, Judge Swantanter Kumar slammed authorities of Delhi and four of its neighbouring states for not taking action sooner to control alarming levels of pollution.

“What did you do when all this smog was going on and the particulate matter reached beyond prescribed limits?” Kumar said, according to the Press Trust of India news agency.

Delhi authorities have so far responded to the smog by including a ban on setting off fire crackers – except at religious events – and driving restrictions earlier this year.

Authorities are also considering cloud-seeding to produce rain, a technique Beijing used to clear the air before the 2008 Olympic Games.