Clinton is Pakistanis’ choice for US president, survey finds

Clinton is Pakistanis’ choice for US president, survey finds

Here’s how Pakist­anis would vote (if they could) in the US electi­ons
By News Desk
Published: November 8, 2016
Tweet Email 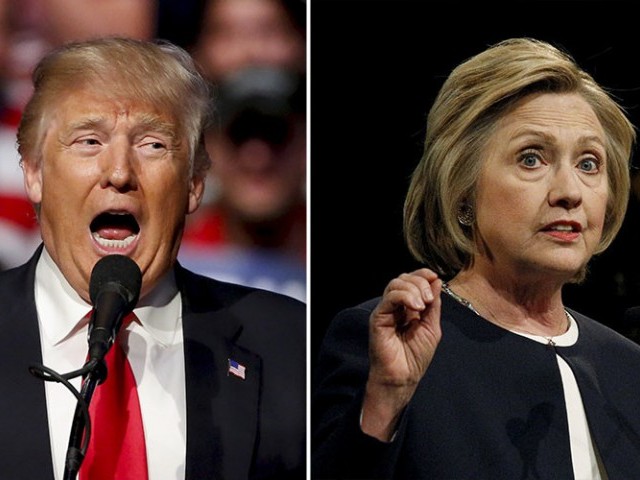 The United States goes to the polls today to elect its 45th president, with the race between Democrat nominee Hillary Clinton and Republican choice Donald Trump remaining too close to call.

In a survey conducted by The Express Tribune, however, the choice is clear, with 71% of respondents believing that Clinton will be the next president of the US.

The survey was taken by 1,606 Pakistanis, of which 82.4% were male and 17.4% were female, while 0.2% selected other. Sixty-two per cent of the respondents have voted in elections before.

The US presidential elections 2016 has drawn interest from across the globe and has been one of the most eventful and controversial campaigns. Our survey shows that 62.1% of Pakistanis followed the debates, while 83.6% believed that Clinton won the debates.

According to 73.5% of respondents, Islamophobia – which Trump has been accused of following his comments against Muslims, Pakistanis and refugees — is on the rise in the US. It, therefore, comes as no surprise that statistics compiled from the survey show 74.8% of Pakistani respondents believe that foreign policy under Clinton would be more stable for Pakistan and 70.4% agreed that the election result does matter for Pakistan. 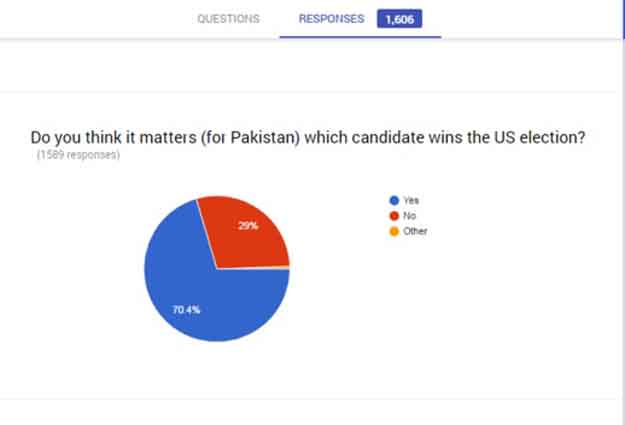 But when it comes to serving the interests of Pakistanis better, according to the majority of respondents, neither of the two will build stronger ties between the US and Pakistan. 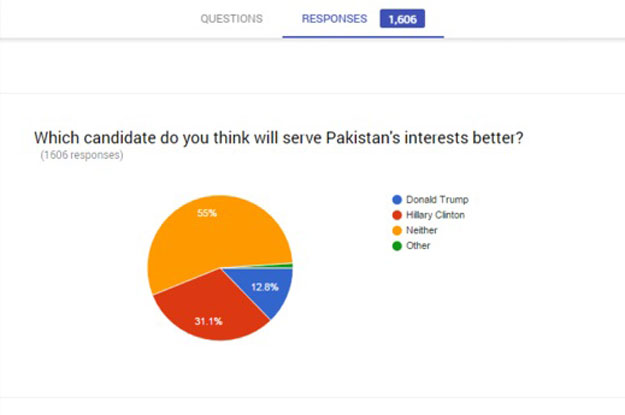 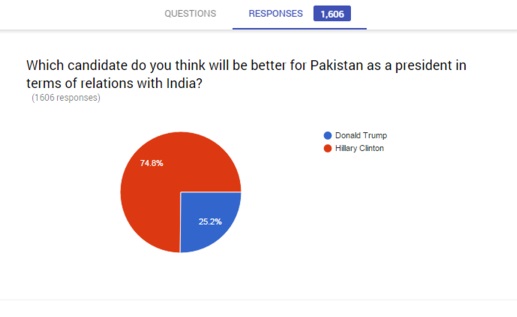 The refugee crisis has been a political flashpoint of the US elections, with Trump stating that his administration would not admit refugees without local support and criticised Clinton’s support for accepting people fleeing Syria. Eighty per cent of Pakistanis support Hillary’s refugee policy, while just 19.7% support Trump’s. It is important to note that Pakistan – home to the third largest number of refugees in the world – is in the midst of a refugee crisis itself, with the government planning to repatriate around a million Afghans. When it comes to security policies, the results are clearly in favour of the Democrat, with 77.1% saying they support Clinton’s laws prohibiting racial profiling, such as targeting Muslims and African Americans. Only 22.9% said they support Trump’s police profiling as a measure to prevent terrorist attacks on US soil. Meanwhile, only 19.9% support Trump’s controversial immigration policies. 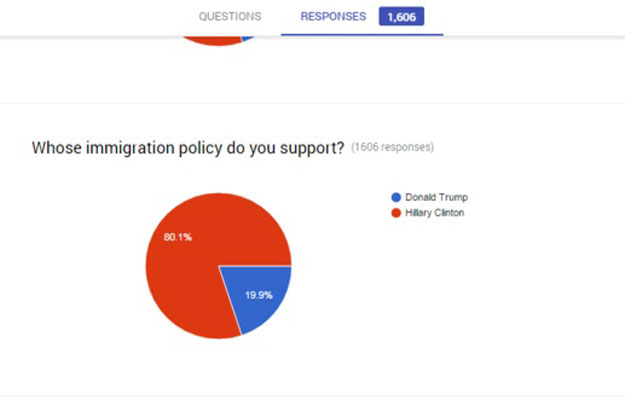 In terms of domestic policies, 65.2% of respondents chose Clinton over Trump when asked who they would vote for if they were American citizens. Fifty-nine per cent of respondents support Clinton’s policy against banning abortion and 82.8% support her policy of tighter background checks for purchasing guns and banning assault weapons. Forty per cent support Trump’s policy of banning abortion and 17.2% believe guns should be easily available for self-defense. 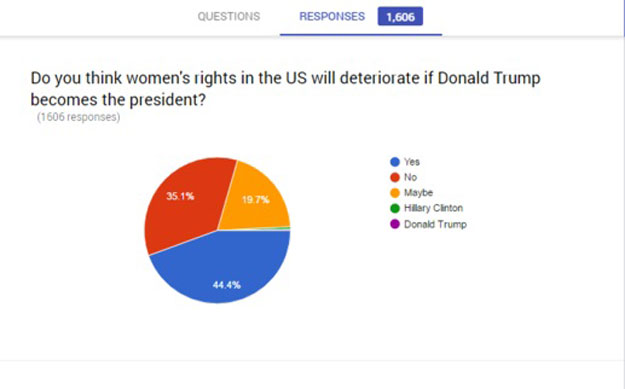 Survey: Donald Trump or Hillary Clinton – Who do Pakistanis support?

Trump’s notorious comments about “grabbing” women led to a drop in the number of American women supporting him and according to our survey, 44%of Pakistanis agree that women’s rights will deteriorate under Trump’s presidency.

Although the Republican believes the elections can be rigged, only 23.6% of Pakistanis agree with him.