Amara Chaudhry Kravitz was born and raised in the United States. Coming from a Pakistani-American family from Lahore, Kravitz, a civil rights attorney, spent all 40 years of her life in the US. Today, she says she has considered leaving the only country she has ever known because of the political rhetoric against Muslims in the presidential election.

“As a person living in the United States, I was looking for jobs overseas,” Kravitz says. “I was credibly considering relocating only to keep my family safe.” Kravitz is just one of many Pakistani-Americans who has struggled with the presidential election and its effects on the community. Donald Trump’s proposal to ban Muslims and immigrants from coming to the US has alienated the Pakistani-American community, who in their fear and distaste for Trump support Hillary Clinton, usually as “the lesser evil”.

“I was speaking to my husband, and our eight-year-old doesn’t want us watching coverage of the election cycle at all,” Kravitz says. “If Donald Trump comes on TV, she will actually leave the room crying. Because she’s very concerned Trump is going to ban all Muslims in the country, just expel us all,” she adds. 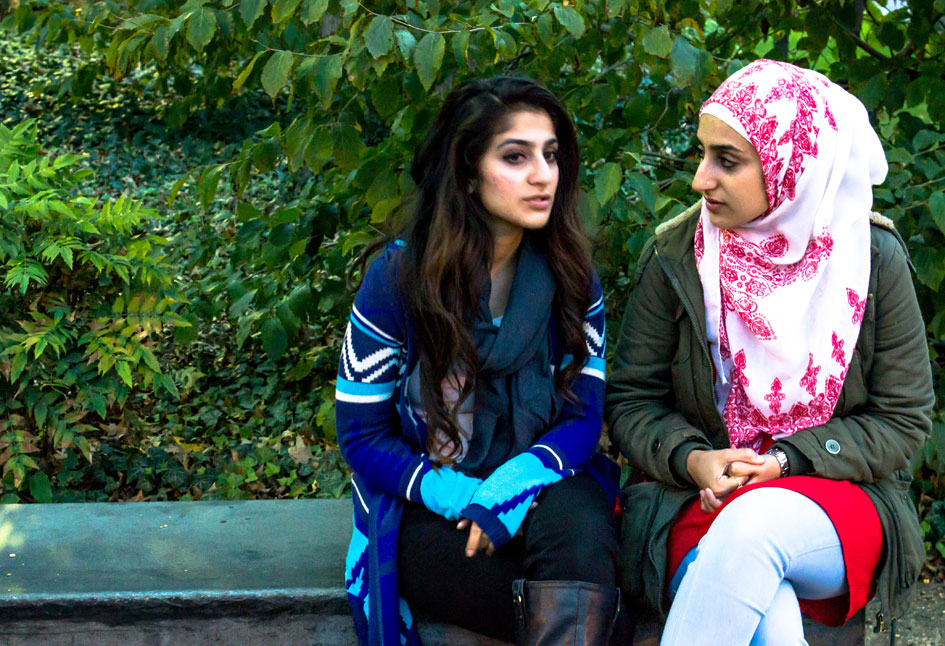 Remshah and Redah Raza were born in Kashmir and moved to the United States when they were young. Remshah plans to vote for Clinton, and Redah Raza is unsure if she wants to vote at all. PHOTO: Iman Sultan

Remshah Raza, 21, was born in Azad Kashmir and moved to the US when she was two years old. She says she will vote against Trump in this election, regardless of who is running. “Honestly, none of them are better,” she says. “It’s just Trump is more racist, and I feel he’ll be worse to Muslims than Hillary will be.”

Survey: Donald Trump or Hillary Clinton – Who do Pakistanis support?

Her sister, Redah Raza, 23, says she doesn’t know if she will vote because she finds the whole process pointless. “I don’t know if I would actually want to vote,” she says. “Because nothing is going to happen: If Hillary wins, it’s the same old, if Trump is going to win, same old.”

Redah, who wears a hijab, says she does not respond well to racial discrimination.

“That’s the thing I’m really scared about,” she adds. “Because I hate racial comments and I feel I’ll be out of control, I’ll get really mad.” She says she would have voted for Bernie Sanders if he was still in the race, because she does not believe Clinton has the best interests for Pakistani-Americans at heart. 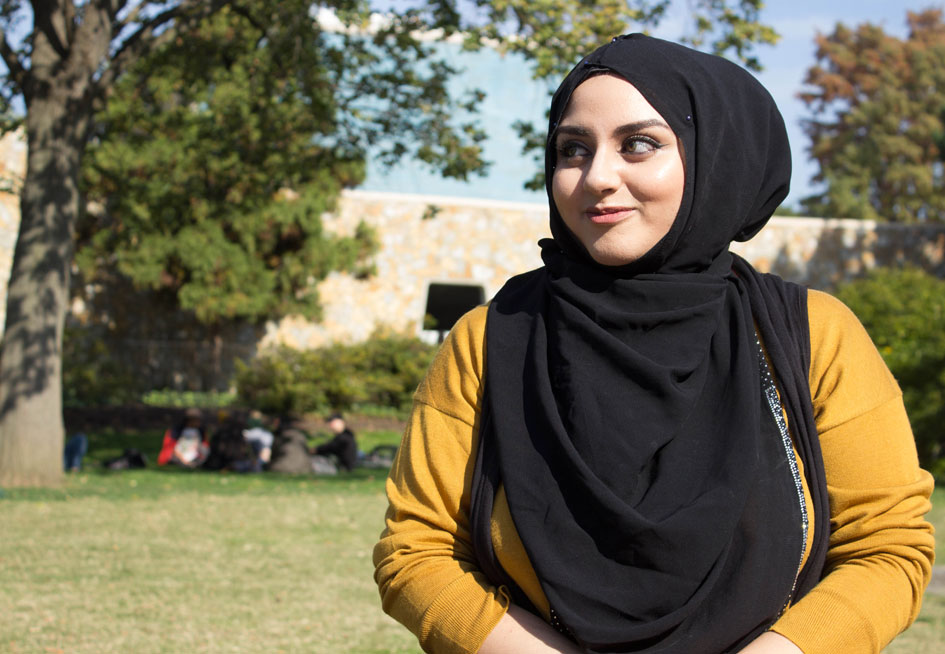 Sajal Khan would like to vote third-party, but she doesn’t know if it will make a difference in the election. PHOTO: Iman Sultan

Sajal Khan, 19, from Upper Darby, Pennsylvania, says she would like to vote for third-party candidates since she finds neither Trump nor Clinton worthy of support, but she questions the purpose of voting third-party, who she knows stand no chance of winning. “I think it’s a joke we have two bigots running,” she says. “The other parties I have looked into, they’re good. But nobody’s going to vote for them.”

Khan fears what might happen to Muslims if Trump gets elected, especially since she wears a hijab. But she believes the worst is yet to come for Pakistanis in the US. “If he were to get into office, God forbid, he would make life really hard for us,” she says. “And we would have to struggle.” 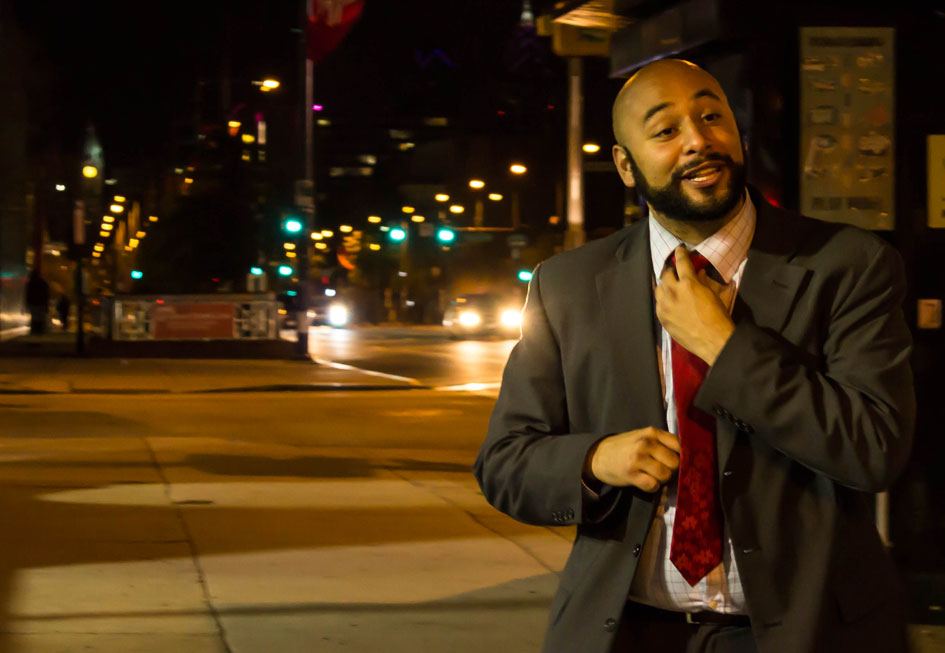 Asim Malik is undecided about voting, but he believes humanity is more powerful than political differences. PHOTO: Iman Sultan

Asim Malik, 27, a marketing consultant, says he is undecided about voting, but finds himself drawn to Clinton. “I’m undecided, but I’m drawn to Hillary Clinton because I don’t believe anything Trump says,” he explains. Malik is half-Dominican, half-Pakistani. Born in Harlem, he now lives in Langhorne, Pennsylvania. “Trump is building upon the Islamophobic aspect of American culture that’s been growing since 9/11,” he says. “Even since 9/11, there’s been more understanding [of Islam] in majority of American culture than there is in the fear of it.”

For Malik, Trump’s Islamophobia delegitimises him, because it makes him look “uneducated”. But Malik isn’t sure if he will vote for Clinton. While he values Clinton’s initiatives for affordable education, he finds himself too indifferent to participate in the election. “I think if you’re not going to vote, or if you are going to vote, it’s not going to matter,” he adds. Malik shares he has voted before, but he didn’t vote in the last election. “I didn’t vote for Obama to go to a second term. Not because I didn’t want him to, I just didn’t vote because I didn’t care enough,” he says. Malik doesn’t care enough to vote this election either, whether it’s for Clinton or against Trump.

Conversely, Mohammad Aziz, founding member of the Pennsylvania chapter of Emerge USA, a non-profit organisation that politically mobilises American-Muslims, Arab-Americans, and Pakistani-Americans, says Pakistani-Americans will have no voice in politics if they refuse to participate. “If you’re not on the table, you’re on the menu,” Aziz says. “It has multiple benefits to get involved, and to do it in an organised way.”

Aziz immigrated to the US in 1979. A worker in the IT industry, he is 63 years old and the father of five children. He believes young people need to get involved to make a difference. “When we are working with them, they can’t talk against us, because then we can defend us,” he says. Aziz notes Emerge has a good relationship with the Clinton campaign, which he believes will benefit Muslims. He says he will vote for Clinton because she is “the lesser of the two evils”.

Kravitz also plans to vote for Clinton, even though she doesn’t consider the candidate left-wing enough for her taste. “I would prefer someone who’s willing to go further on issues such as criminal justice reform,” she says. “I also think America’s stand on Israeli-Palestinian relations has been very one-sided.”

But Kravitz will vote for Clinton, because she finds the candidate the most reasonable choice for America. “She seems like the wiser choice strategically,” she adds. “I also think she’s an incredibly confident, well-qualified person. She is a very centrist political person like her husband; she is centre-left, not far-left. You need a centrist political figure to help balance out the country, stabilise it, and attempt to build bridges where they are possible,” she says, adding the Obama presidency led to the right-wing backlash represented by Donald Trump and his supporters.

Saba Ahmed, 31, the founder of the Republican Muslim Coalition, says she will vote for Trump in spite of his “hurtful” comments against Muslims. “I think Islamic values conflicted a lot with the liberal policies that Democrats supported, and I found it hard to defend myself as a Democrat,” she explains. Ahmed says she will vote for Trump because he is stronger in defense, national security and economic policy than the Democratic Party. 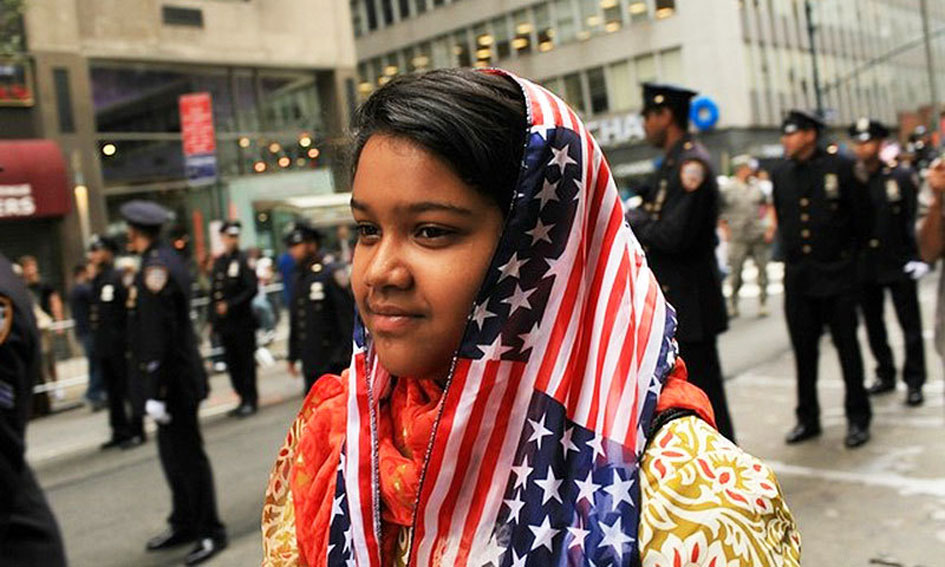 And while Ahmed comes from the side opposite of Emerge, she too believes Pakistanis need to be more politically engaged in America. “Getting involved in campaigns is a good start,” she says. “This election year is a great opportunity to make a difference, not just by your vote, but who you’re supporting financially.”

But indifference still persists among young would-be voters, who don’t believe their vote will change anything, though they seek political engagement in other ways.

“If you want something to really change, it doesn’t take one person,” Malik says. “It takes multiple people. But how do you do that? You don’t send out flyers, you don’t sit there and do propaganda and you don’t go talk to a bunch of different people and make them join your side because there is no side. It’s all one side. It’s the human side.”

Election day in the US is on Tuesday, November 8. It marks the first election cycle in eight years where Obama cannot contend for office, signalling the end of his term, and the beginning of a new one.

Iman Sultan is a Pakistani-American freelance journalist and activist based in Philadelphia. She studies political science and journalism at Temple University.