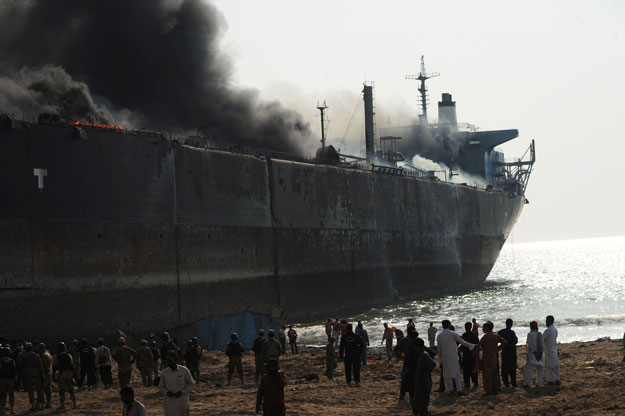 bystanders gather around the wreckage of a burning ship after a gas cylinder explosion at the Gadani shipbreaking yard, some 50 kilometres (30 miles) west of Karachi on November 1, 2016. PHOTO: AFP

QUETTA: Firefighters were battling on Wednesday to douse a fire still raging more than a day after a series of explosions on a decommissioned oil tanker, with the death toll rising to 17, and more than 20 workers missing, officials said.

Tuesday’s initial blast occurred as workers were welding near a fuel tank in a shipbreaking yard in Gadani, 45km northwest from Karachi, said Zulfiqar Bokhari, a local administration official.

‘We thought an Indian missile hit us’

“The fire is still burning,” said Bokhari, adding that civilian and military firefighters were struggling to put out the flames, which had been ignited by two blasts in quick succession and followed by eight more explosions.

At least 58 people were injured in the blasts, and between 20 and 25 people were still missing, he added. Labourers in Gaddani often work in poor conditions without basic protective gear. The Gaddani ship-breaking industry, which has fallen on hard times recently, employs about 9,000 workers, far fewer than during its boom years at the end of the last decade.