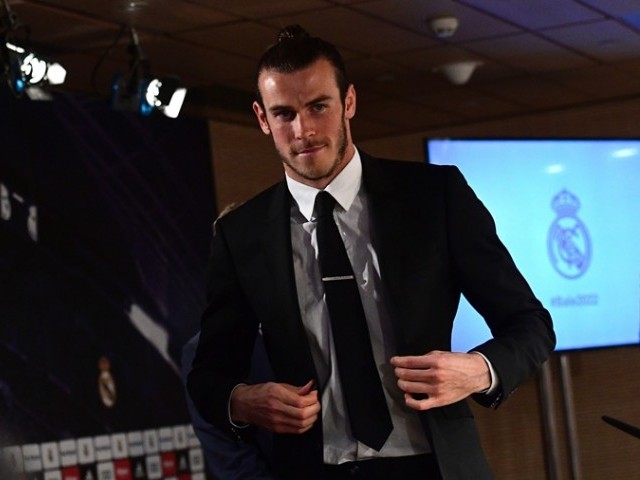 Real Madrid's Welsh forward Gareth Bale leaves a press conference in the media room at the Santiago Bernabeu stadium in Madrid on October 31, 2016. Real Madrid and Gareth Bale have agreed an extension to the player's contract, keeping him at the club until the 30th of June 2022. PHOTO: AFP

MADRID: Gareth Bale declared the lure of “the biggest club in the world” behind his decision to sign a new bumper six-year deal with his current club Real Madrid, which makes him one of football’s highest paid players.

Bale, who has won two Champions League titles in three seasons in Spain, is set to take home as much as £350,000 a week after tax, according to British media, though reported figures vary wildly.

However, Cristiano Ronaldo looks set to retain his status as top dog of the pay packet at the Bernabeu with the Portuguese expected to become the latest Madrid star to extend his deal in the coming weeks.

“It’s Real Madrid, it is the biggest club in the world,” Bale told the world’s media on Monday at a press conference to announce the new deal. “When an opportunity to play for Real Madrid comes up, you don’t turn it down.”

Bale joined Real for a then-world record fee of just over €100 million from Premier Leauge side Tottenham Hotspur in 2013.

“I think I definitely made the right decision,” added Bale. “We’ve won two Champions Leagues in the three years since I have been here. That is better than anyone else.

“It matches all my ambitions, so I am happy to be here and we need to win a lot more trophies in the next six years.”

Bale has enjoyed and endured plenty of ups and downs in his three seasons in the Spanish capital.

Goals to win the 2014 Champions League and Copa del Rey finals made him an instant hit.

However, he suffered from stinging criticism and was jeered by the Real fans towards the end of a trophyless second season.

“It’s very easy to pack up and leave and go elsewhere, but it takes more character to stay here and fight,” added the 27-year-old. “I’ve always grown up with the idea if things are not right, you work hard to make it right.”

And he believes it is that campaign rather than the heights of Champions League success in Lisbon in Milan that has made him a better player.

“When a British players travel abroad, it is never usually greatly successful, but it’s something I wanted to try, something to improve my football,” he continued. I had one season when it maybe wasn’t the best, but I think this was the best season for me.

“It made me grow up as a player and a person and I think gave me more confidence to deal with whatever is thrown at me.”

Real president Florentino Perez has long believed in Bale to be the man to succeed Ronaldo as Real’s best and most marketable player.

That could be enhanced by a first ever place on the podium for the Ballon d’Or after Bale was named among the 30 nominees for the prize last week.

However, Bale insisted emulating Ronaldo by winning the Ballon d’Or is not top of his wish list.