Pacer believ­es playin­g on flat pitche­s in UAE will help him during his visit Down Under
By AFP
Published: November 1, 2016
Tweet Email 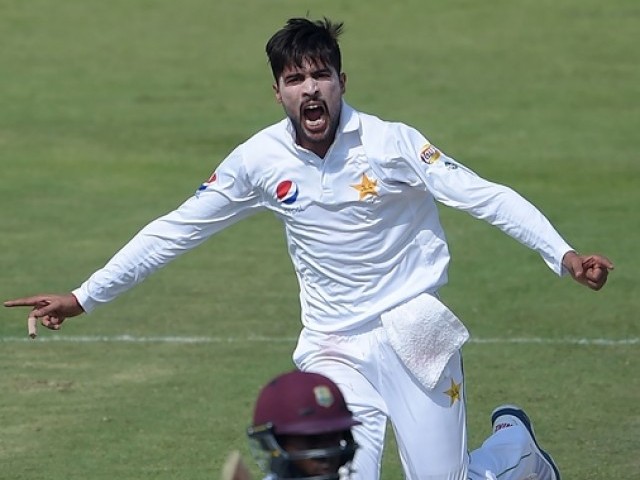 Pakistani bowler Mohammad Amir celebrates after taking the wicket of West Indies' batsman Jermaine Blackwood (front) on the second day of the third and final Test between Pakistan and West Indies at the Sharjah Cricket Stadium in Sharjah on October 31, 2016. PHOTO: AFP

SHARJAH, UNITED ARAB EMIRATES: Pakistan fast-bowler Mohammad Amir on Monday said that he was gaining rhythm with each match and looks forward to next month’s tour of New Zealand, which will be followed by a trip to Australia.

The 24-year-old took 2-44 on day two of the third and final Test against the West Indies on a day when Pakistan announced a squad for the two-match Test series in New Zealand.

Amir is in the tenth month of his return to international cricket following a five-year ban on spot-fixing, a scandal which almost ended his burgeoning career.

At the time of the ban, Amir was regarded as “the hottest property at international cricket” by legendary Pakistan paceman Imran Khan.

Since his return in January this year, Amir had played T20 and one-day only, before playing four Tests in England in July-August.

“Five years is a long period so I am gaining my rhythm and I am looking forward to trips to New Zealand and Australia. I Have been to both countries earlier and pitches there help fast bowlers,” Amir told reporters.

“With the exposure of playing at tracks like in the United Arab Emirates you definitely get a lot of confidence to do well in Australia and New Zealand.”

After two Tests in New Zealand, Pakistan will play three Tests and five ODIs on their trip to Australia.

Amir admitted he faced some fitness issues. “I did face some problem with fitness which was expected after five years’s absence,” he added. “It is very tough for fast bowler especially to come after such a long period and be there at once.

“Outings in New Zealand and Australia and performing there in those condition will give me immense confidence.”

The 24-year-old further said that resting him in the second Test in Abu Dhabi was justified. “I am playing from last one year now and i think fast bowler needs rest,” he said. “We have bowler sitting at the bench, who are quality bowlers and you never know me and Wahab can be injured at any stage.”

Amir hoped the swing he was famous for will return with each match. “You can’t reach there in days as you need to keep on performing,” said Amir. “I still have a long career ahead of me and I am working hard to get there where I left in 2010.

“Since my comeback I was playing T20 cricket where bowling is totally different and I was going wide of the crease earlier but now I have minimise it and worked on my arms and its working in my way.”