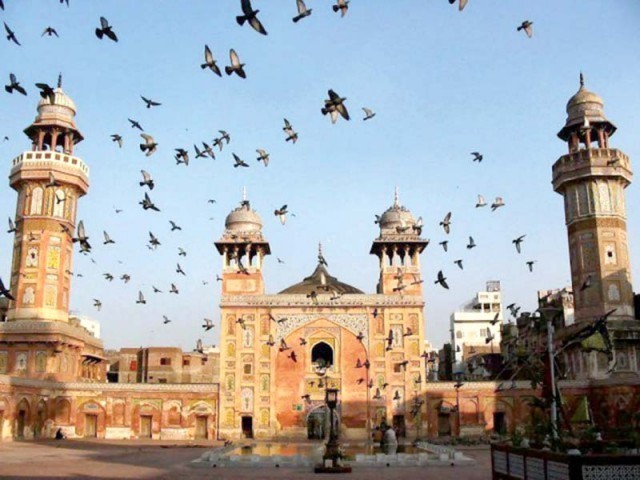 The profuse architectural decoration is a singular outstanding attribute that places the mosque in the frontline of the major monuments of the world. PHOTO: FILE

LAHORE: The conservation of the northern face of the Wazir Khan Mosque was officially completed yesterday.

The initiative was taken by the Aga Khan Cultural Service, Pakistan (AKCSP) while the project was financed by the Royal Norwegian Embassy and the Aga Khan Trust for Culture, and facilitated by the Walled City of Lahore Authority (WCLA).

A plaque was unveiled by Norwegian Ambassador Mr Tore Nedrebo and DG WCLA Mr Kamran Lashari, in the presence of CEO AKCSP Mr Salman Beg, members of the Wazir Khan Mosque Committee, as well as representatives of the conservation team that worked on the various phases of the project from July 2014 – June 2016.

According to the press briefing by the WLCA, the first phase of the project involved the removal of encroachments and dense overhead cables, the archaeological excavation of a 300 cubic-metre trench along with the façade with a retaining wall that exposed the original floor level and hujras (chambers) built into the façade, and the construction of a soakage well for the drainage of the trench.

The second phase involved the detailed documentation of the façade, structural consolidation of the excavated hujras, and conservation of the architectural embellishments including cut-and-dressed brickwork, carved brickwork, brick imitation work, and restoration of terracotta screens, woodwork and missing masonry elements.

For the sensitive issue regarding the conservation of glazed tile mosaics, a detailed value assessment of material physical, phenomenological and cultural social values of the mosque was conducted in order to establish prototype panels and a justifiable course for their conservation.

On the occasion, WCLA Director-General Kamran Lashari said the rehabilitation of the northern façade and the adaptive reuse of its hujras for the sale of traditional handicrafts will highlight the rich Mughal heritage of the Wazir Khan Mosque. It will also form a template for the conservation of the entire mosque when the latter is put into effect.

According to AKCSP CEO Salman Beg, a comprehensive documentation of the mosque was carried out and published in 2012 by a technical team of conservation architects and engineers from AKCSP, to determine the range of problems and issues faced by the mosque.

Salman said since efforts to secure funds for the conservation were bound to take time, it was broken up into phases that could be individually funded from different sources.

The mosque was built in 1634-35 by Hakim Ilmuddin in the reign of Shah Jehan. The Wazir Khan Mosque complex was a primary central element of the walled city, and included the mosque itself, the Chowk (an introductory urban space) a row of shops (hujras) integrated in the entrance system meant specifically for calligraphers and bookbinders, and additional shops on the eastern and northern façades built into the body of the monument.

The profuse architectural decorations, that embellish its exterior and interior surfaces, most predominantly its kashikari (glazed-tile mosaic work), are a singular outstanding attribute that places the mosque in the frontline of the major monuments of the world.