The palace's recons­tructi­on was launch­ed by Presid­ent Ashraf Ghani in May
By Reuters
Published: October 27, 2016
Tweet Email 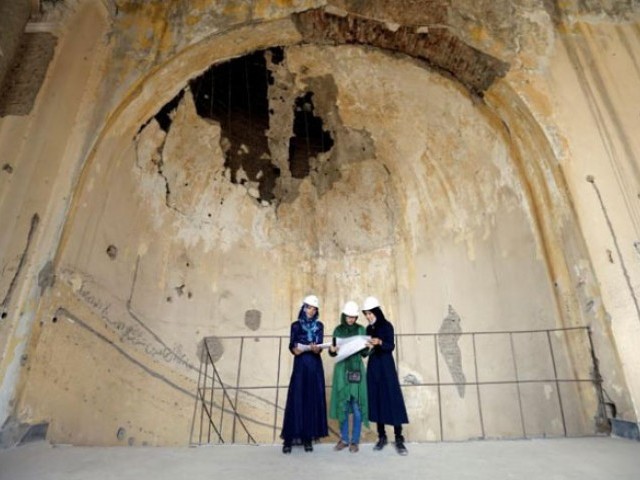 Long a symbol of the country’s decades of war, the abandoned palace in Kabul – bombed-out and bullet-scarred – is to be rebuilt under an ambitious government plan, and women make up a quarter of the workforce. That’s more than symbolic in a country where opportunities for women to develop careers are severely limited.

“Our participation in this important project breaks the taboo that considers women to be too weak to work on construction projects,” Zahra Jafari, a female electrical engineer, told Thomson Reuters Foundation by phone.

“It’s a huge responsibility on each and every one of us. We strive for excellence and work hard to achieve success beyond expectation. And we want to prove that women are capable of implementing national projects.”

The palace’s reconstruction was launched by President Ashraf Ghani in May and the government hopes the site, next to a new, Indian-financed parliament, can become the center of a new government quarter as well as a tourist attraction.

Wearing standard-issue hard hats, 20 women work alongside 60 male colleagues in the skeleton of the European-style edifice that was built in the 1920s by former King Amanullah Khan just outside the capital.

The building was destroyed in the civil wars of the 1990s, when fighting between rival militias killed thousands in Kabul.

“We selected the engineers by only considering their expertise and experience,” Sayed Zia Hussaini, senior advisor to the Minister of Urban Development and supervisor of the project, said by phone.

“It was a transparent process and women engineers went through the same selection process as their male counterparts.”

Hussaini added that although women made up just 25 percent of the engineers, they were doing 40 percent of the reconstruction work, which will cost $20 million over three to five years.

Most Afghan women serve sentences in elders’ homes, not prisons

In traditional Afghan society, it is unusual for women to work outside the home. Instead, they are mostly employed as teachers, nurses, doctors and midwives.

In the late 1990s when the Taliban controlled Afghanistan, women were banned from attending school and even going shopping without a male companion.

After the collapse of the Taliban, women regained some freedom to work outside the home – but many consider working on construction sites a step too far.

Not so Zahra Jafari, who studied electrical engineering at Kabul University.

“By working on this project, we are contributing to the reconstruction of our country and empowering women,” she said. “I hope it changes the views of the outside world about Afghan women too.”