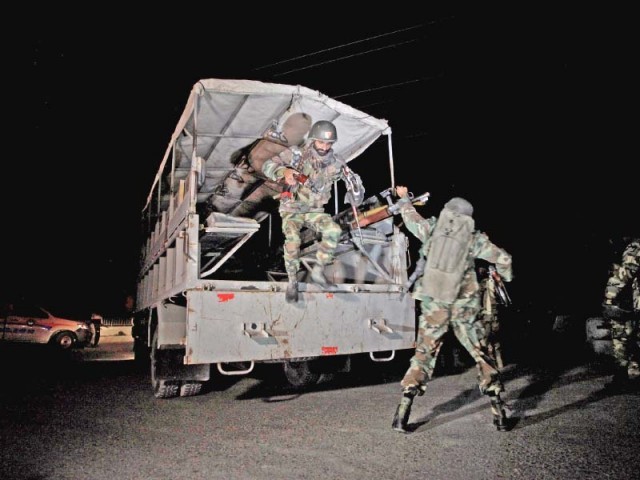 Troops deploy outside the Police Training Centre after gunmen opened fire on the facility. PHOTO: REUTERS

QUETTA: Around half a dozen terrorists stormed a police training centre on the edge of the provincial capital late Monday night, injuring dozens of recruits as army and Frontier Corps troops mounted an operation to eliminate the attackers.

The terrorists opened indiscriminate fire before storming the New Sariab Police Training College, some 13 kilometres away from Quetta city, Home Minister Mir Sarfaraz Bugti said. The terrorists headed straight for the hostel where around 250 police recruits were sleeping.

The military said in a statement that army troops have taken control of the security operation. Officials added that commandos of army, FC, police and Anti-Terrorists Force, backed by helicopters, were participating in the operation. The building reverberated with gunshots amid sporadic explosions as television footage showed speeding ambulances carrying injured recruits.

The casualties were driven to different hospitals of the city where a state of emergency was declared. Provincial authorities, in the meantime, also made arrangements to fly those with critical wounds to hospitals in Karachi.

Bugti claimed that the commandos have rescued 200 recruits, while two of the terrorists have been taken down. The operation was ongoing when this report was filed. Bugti said Quetta was located in the conflict zone where a fight against terrorism has been ongoing. “Our objective is to decimate terrorists,” he added.

Chief Minister Nawab Sanaullah Zehri said that the terrorists attacked the police centre, which is located on the edge of Quetta, after they failed to hit a target in the provincial capital where security was on high alert following intelligence information about a possible attack three or four days back.

No group immediately claimed responsibility for the attack which carries the signature of Taliban terrorists.

The attack came a day after separatist gunmen for the Baloch Liberation Army on a motorcycle shot dead two coast guards and a civilian and wounded a shopkeeper in the remote coastal town of Jiwani.

In August, a suicide bombing at the Civil Hospital Quetta killed 73 people, including many of the city’s lawyer community who had gone there to mourn the fatal shooting of a colleague.

Balochistan is also a key region for China’s ambitious $46 billion China-Pakistan Economic Corridor (CPEC) infrastructure project linking its western province of Xinjiang to the Arabian Sea via Pakistan. Security problems have mired CPEC in the past with numerous separatist attacks, but China has said it is confident the Pakistani military is in control.

Pakistan blames India for fuelling terrorism in Balochistan in an attempt to sabotage CPEC. A senior officer of Indian navy, Kulbushan Jadhav, was arrested from Balochistan earlier this year.