Pro-Altaf wing leader­s Dr Arif, Kanwar Khalid and Amjadu­llah were arrest­ed before they were to hold a presse­r at KPC
By News Desk
Published: October 22, 2016
Tweet Email 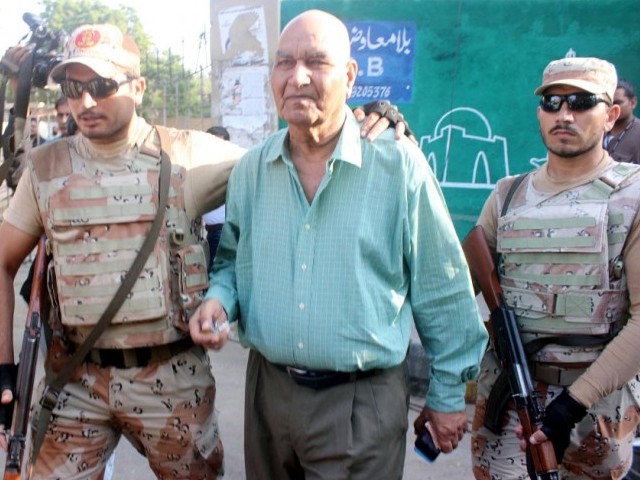 The Sindh Rangers took into custody three leaders of the Muttahida Qaumi Movement (MQM) London from outside the Karachi Press Club (KPC) on Saturday.

Subsequently, hours after the arrest, Amjadullah Khan, another member of the pro-Altaf wing, was taken into custody soon after he stepped out of the press club.

Prior to their custody, the three leaders had arrived at the KPC to address a press conference in connection with the ongoing arrests of the party workers in the metropolis.

According to senior leader of the pro-Altaf faction Wasay Jalil, acting zonal in-charge in Hyderabad Zafar Rajpoot has also been arrested by the Rangers personnel. “Several houses and office-bearers were raided by the paramilitary forces,” Jalil tweeted.

On October 15, 12 members of an interim Rabita (Consultation) Committee of MQM-London, which was formed a day earlier and endorsed by Altaf, were present during the press conference.

Speaking to the presser, Dr Arif had said that conspiracies being hatched against the party will fail, saying Pak Sarzameen Party (PSP) was created to divide the party but it will fail in its attempts.

The MQM-Pakistan completely divorced itself from the aforementioned London leaders on September 20 as well as Nadeem Nusrat, who had opposed the exclusion of Altaf from the party, and removed them from the Rabita Committee.

The divisions occurred after the party’s founder uttered a hate speech against the state and its institutions on August 23 and reportedly incited his supporters to launch an attack on televisions stations in the city.