Demand increa­se of fee cap to at least 10% to bear rising expens­es
By Our Correspondent
Published: October 20, 2016
Tweet Email 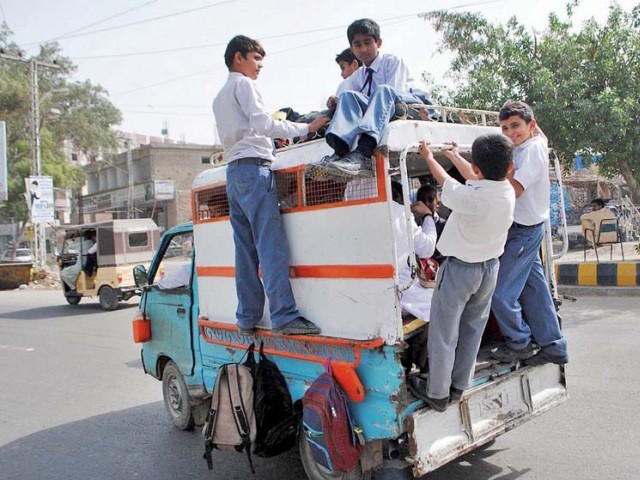 A number of school children travel in a van Hyderabad. Parents of certain students in Karachi approached the court against what they saw as an unjustified increase in school fee. PHOTO: ONLINE

KARACHI: The All Private Schools Management Association (APSMA) of Sindh has decided to challenge the decision of the Sindh High Court that stated that no school can increase its yearly fee by more than 5%.

“We are reviewing how to go about the decision as 5% is very less and the schools with very low fee structure will suffer due to this,” said APSMA head Syed Khalid Shah during a press conference at the Karachi Press Club on Wednesday.

The press conference was held to highlight APSMA’s stand on the high court decision to cap the increase of schools to only 5%. Earlier, former senior education minister Nisar Khuhro had decided to fix the raise up to 10%, after reviewing the complaints of parents who had to pay the increased fee of the Generations School, in a meeting last year.

Demanding to increase the increase cap to at least 10%, he said that 90% of the private schools are operating in rented buildings and, hence, the landlords increase the rent according to their will. A more than 10% increase in rent every year should not be allowed, he said.

“Due to the low fee charged and other expenses, the annual increment of the teachers has been suffering,” said Shah, adding that, according to the rules, the schools that faced a problem in a 5% increase could have appealed to the education department for permission to provide up to 10%. However, the opportunity to make such an appeal has also been removed after the high court order.

It was decided that schools should be allowed to increase 10% only and the schools subject to maximum of Rs2500 only, said Shah, while explaining the process that was applied by the advisory committee. “Why should all the schools all over the province suffer due to a few elite schools against whom the parents went to court?” pointed out Shah. According to him, the decision should be specified to certain schools only.