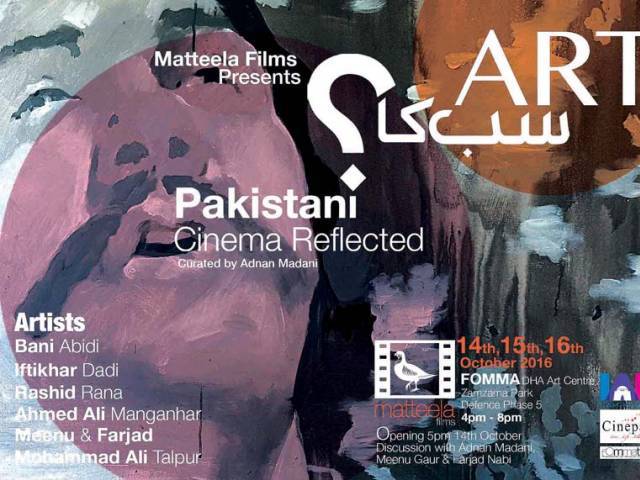 KARACHI: I Am Karachi Film Festival and Matteela Films have partnered to showcase some of the top Pakistani artists in an art exhibition titled Art Sabka. The exhibition is to be held at FOMMA DHA Art Centre from October 14 till October 16.

It is centered on Pakistani cinema and aims to promote the idea of owning Lollywood in the light of modern-day Pakistani cinema. “However marginal the Lollywood film industry has now become, its imprint cannot disappear from the imagination of the Pakistani public,” Matteela Films CEO Mazhar Zaidi said, in a press release.

“Thus was born the idea of a Pakistani cinema-based art exhibition which was both an acknowledgement and an inquiry of the far-reaching influence of this film industry,” added Zaidi. “As a new Pakistani film industry is coming forth, which may or may not acknowledge the old, we are in no doubt that we have no heritage if we choose not to claim this one.”

Curated by Dr Adnan Madani, the exhibition lineup includes a variety of acclaimed artists such as Bani Abidi, who uses photography and video to comment on political issues and culture.

Other artists featured are Muhammad Ali Talpur, a minimalist artist famous for his monochromatic linear drawings, Lahore-based Ahmed Ali Manganhar, Rashid Rana and Iftikhar Dadi. The artists will be joined by Meenu and Farjad, the co-directors of Zinda Bhaag, who are awaiting the release of their next film, Jeewan Hathi on November 4.