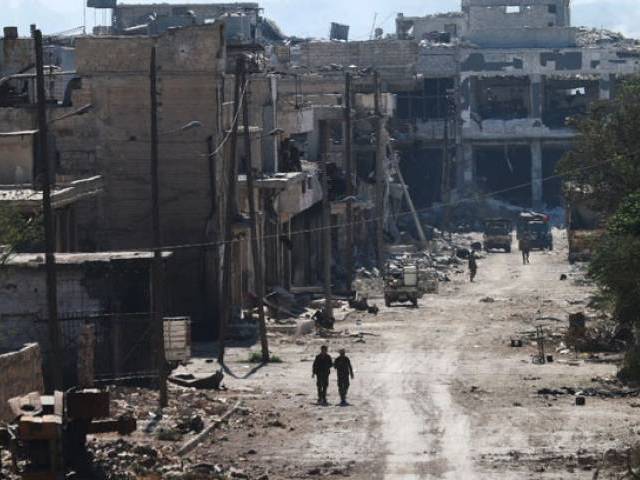 The army launched its assault on the besieged sector of Aleppo two weeks ago with the backing of Russian air strikes. PHOTO:AFP

BEIRUT: Syrian government forces kept up their blistering assault on rebel-held eastern Aleppo after a divided UN Security Council failed to agree on a truce to save the war-battered city.

Regime forces and their allies were advancing street by street in the eastern sector, which has been out of government hands since 2012.

“Clashes on the ground as well as fierce air strikes went on all night and are continuing Sunday, especially in the Sheikh Said district” of eastern Aleppo, said Rami Abdel Rahman, head of the Syrian Observatory for Human Rights.

The monitor said regime forces took control of the Jandul crossroads in the northeast of Aleppo.

The latest advances aim to clear the way for “a crucial and decisive land offensive”, said Syria’s Al-Watan newspaper, which is close to the government.

The army launched its assault on the besieged sector of Aleppo more than two weeks ago with the backing of Russian air strikes, aiming to reunite the city, which was Syria’s economic hub before its conflict erupted in 2011.

Air strikes and artillery fire by the regime and its Russian ally killed 290 people, mostly civilians and including 57 children, since the September 22 launch of operations in Aleppo, the Observatory said.

The Britain-based monitor, which compiles its information from sources on the ground, said 50 civilians, including nine children, have also died in rebel bombardment of regime-controlled western districts.

On Saturday at the United Nations, Russia vetoed a French-drafted resolution demanding an end to the bombing of Aleppo, but its own rival measure on a truce was rejected.

The failure of the two resolutions deepened divisions at the Security Council between Moscow and the Western powers backing rebel forces in Syria’s five-year war, which has killed more than 300,000 people.

France’s draft called for an end to all military flights over Aleppo and to air strikes on the rebel-held east that has 250,000 inhabitants.

It was the fifth time that Russia used its veto to block UN action on the war in Syria.

Shortly after Russia’s veto, the Security Council rejected a rival draft presented by Moscow that called for a ceasefire but did not mention a halt in air strikes.

Britain’s ambassador to the United Nations, Matthew Rycroft, described Saturday’s failure in New York as “a bad day for Russia, but an even worse day for the people of Aleppo”.

Following the meeting, his Russian counterpart Vitaly Churkin insisted that diplomatic efforts on Syria were not dead.

French President Francois Hollande said in a TV interview to be broadcast Monday that he would hesitate to receive Russian counterpart Vladimir Putin when he visits Paris on October 19 because of “war crimes” in Aleppo. Putin is scheduled to open a Russian orthodox centre in the French capital.

The assault on Aleppo was launched just days after the collapse of a ceasefire in Syria that was brokered jointly by Russia and the United States.

Russia says its air strikes target extremist militias such as the Islamic State group but critics say it is more occupied with keeping Syrian President Bashar al-Assad in power than killing militants.

An analysis published Sunday by the US-based IHS Conflict Monitor said that in the first quarter of 2016, just 26 percent of Russian strikes in Syria targeted IS.

German Foreign Minister Frank-Walter Steinmeier warned that the mounting tensions between Washington and Moscow over the Syrian conflict had created a situation “more dangerous” than the Cold War.

On Sunday, two of Syria’s most powerful militant groups joined forces, as Fateh al-Sham Front — a former Al-Qaeda affiliate — announced it had taken Jund al-Aqsa under its wing.

Jund al-Aqsa is designated a terrorist organisation by Washington and has been accused of ties to IS.