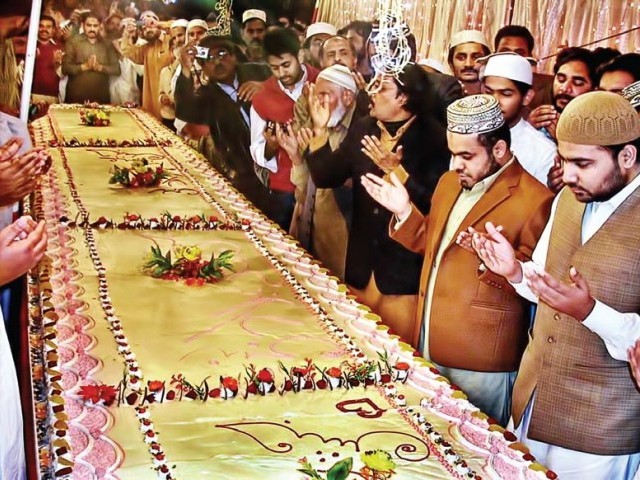 BAHAWALPUR/ FAISALABAD: All preparations to celebrate Eid-e-Milad-un-Nabi throughout the province have been finalised for Wednesday.

District authorities have helped decorate mosques, houses and streets with green flags and lights to commemorate the occasion. A large number of residents from Bahawalpur, Faisalabad, Multan, Sargodha and other districts have assisted in decorating the streets and collecting funds from local communities to set up various ‘langars’ and charity centres in their respective districts.

In Bahawalpur, two main processions of Eid-e-Milad-un-Nabi will be taken out from Milad Chowk and Sirani Masjid respectively. Special programmes including recitation of the Holy Quran and mehfil-e-milad will be organised for the occasion. “Several children’s programmes have also been organised in the district and primary and secondary students will be told stories from Prophet Muhammad’s (pbuh) life,” said a school teacher Razia Alamgir. In Faisalabad, the district administration has constituted several teams to check the quality of food and drinks served at local langars.

The DCO Naseem Sadiq has constituted eight monitoring teams to check all the arrangements around procession routes as well as a food quality inspection team. “Last year there were reports that several distribution points were serving lassi and sabeel mixed with ‘bhang’,” said a district administrator. “Several people at the distribution points had mixed drugs within the food as well, so we are being extra careful and checking everything this year,” he said.

Sadiq said that all routes along the Milad procession routes were being strictly monitored. “We have taken every possible precaution. CCTV camera’s have been installed along all major routes and there is ample police presence in the area,” he said.

The DCO directed the EDO (Health) to issue a duty roster of all DOs and DDOs (Health) to check all beverages and food items served on the occasion for quality and to avoid any untoward incident. “We are trying to collaborate with local philanthropists to ensure that all the food can be easily checked for quality as we want to avoid any chances of an epidemic,” the EDO (Health) said. The Faisalabad Tehsil Municipal Administration (TMA) has been monitoring all procession routes to remove encroachments and debris from the pathways.  The Faisalabad Police department has been instructed to ensure that ample security officials be employed. “We have also been monitoring all the speeches made by local clerics to ensure that no inflammatory speeches are made on the occasion and that they promote a message of peace,” said Central Police Station constable Raja Mansoor.

Regional Police Officer (RPO) Aftab Ahmed Cheema has stressed upon ulema and mashaikh to help maintain peace in the district on Eid-e-Milad-un-Nabi.

Addressing the members of the District Peace Committee, he said that 81 Milad processions would be taken out in Faisalabad and five SPs, 13 DSPs, 24 inspectors, 150 SIs, 249 ASIs and 2,880 police constables had been deputed to arrange for security on the occasion.

The RPO thanked the members of the District Peace Committee for maintaining peace during Muharram-ul-Harram and hoped that they would extend the same assistance to police and administration for Eid-e-Milad-un-Nabi.

“We have asked all prominent ulema to make speeches promoting peace and inter-faith harmony and not to incite the public,” the RPO said. Prominent ulema including Maunlana Yousuf Anwar, Maulana Riaz Ahmed Kharal, Engineer Muhammad Rafique, Maulana Mufti Muhammad Zia Madni and Pir Muhammad Siddique-ur-Rehman spoke about the importance of the occasion. “Islam is a religion of peace and our prophet (pbuh) is the greatest living example for promoting peace in the world,” Maulana Madni said. PPI/APP

On a sweet note

A 2,520 kg cake was baked with regards to Eid-e-Milad-un-Nabi in Faisalabad. The district administration revealed that Rs400,000 had been spent in this regard and that the cake took ten days to bake. Over 280 kilogrammes (kg) of butter, nine sacks of sugar, four sacks of flour, 750 dozen eggs, 50 buckets of jam, 50 kg of almonds, 40 kg of pistachio, 40 kg of coconut essence and four buckets of pineapple were used in the cake. Mahmoodabad Darbar successor Muhammad Masoon said that the cake would be distributed among visitors and local residents on the occasion.

“The weight of the cake totalled 63 maunds to collaborate with the prophet’s (PBUH) age,” Masoon said.

In Multan a 1,212 pound cake was baked and the district administration has said the cake cost Rs500,000. The cake has been placed in the centre of the city and the Tehsil Municipal Authority (TMA) officials will be distributing the cake among locals. “The cake is 40 feet long and 4 feet thick,” a TMA official Riaz said