Army chief on Monday also visite­d the headqu­arters of Strike Corps at Mangla to review the operat­ional prepar­edness­
By Our Correspondent
Published: October 6, 2016
Tweet Email 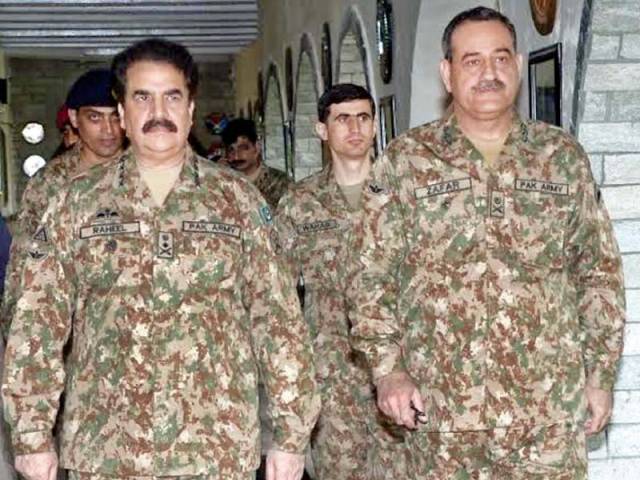 ISLAMABAD: Army chief General Raheel Sharif on Wednesday visited the headquarters of 10 Corps, which is responsible for the security of the Line of Control (LoC), in the backdrop of soaring tensions between Pakistan and India.

The army chief was given a comprehensive briefing by Corps Commander Lt-Gen Malik Zafar Iqbal on the prevalent situation at the 880-kilometre-long ceasefire line and the operational preparedness of the units and formations, according to the Inter-Services Public Relations (ISPR).

While expressing his complete satisfaction over operational preparedness, Gen Raheel appreciated the state of morale of troops and level of vigilance being maintained.

The army chief on Monday also visited the headquarters of Strike Corps at Mangla to review the operational preparedness of the army in the face of frequent ceasefire violations by Indian troops at the LoC.

Pakistan’s civil and military leadership has made it clear that it does not seek escalation in tensions but warned that the armed forces are fully capable of thwarting “evil designs of the enemy”.

Tensions between Pakistan and India are currently running high with amid fears of a possible military showdown, if the current situation is not handled properly.

Besides war of words, the border guards of the two arch rivals continued to exchange fire at the LoC that divides Kashmir between Pakistan and India on Wednesday. The ISPR said Indian troops resorted to ‘unprovoked firing’ in three LoC sectors, Iftikharabad, Kotli and Kel.

“Pakistani troops are befittingly responding to Indian firing,” the ISPR said, adding that the heavy exchange of fire that started Wednesday morning and continued till filing of this report.

The two sides have been regularly exchanging fire at the LoC since last Thursday when India claimed that its troops had carried out ‘surgical strikes’ targeting alleged ‘terror launch pads’ in Azad Kashmir.

Pakistan, however, dismissed the Indian claim, saying it was only aimed at diverting the global attention from the uprising in the Indian controlled Kashmir.

The absence of compelling evidence of surgical strikes has also sparked a raging debate within India as some opposition parties are now calling on the Modi administration to show proof of such strikes.