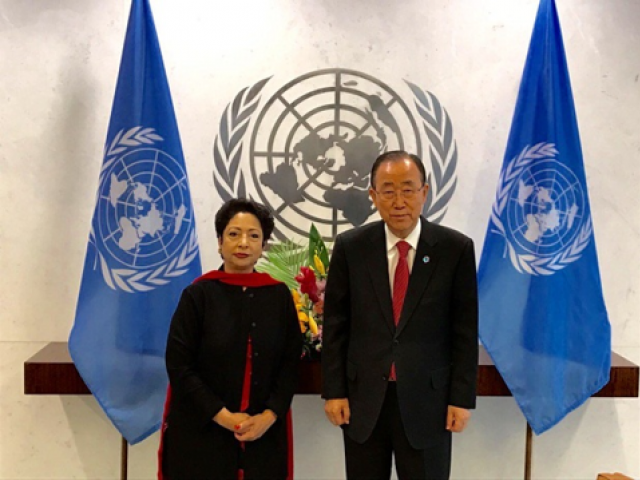 UN Secretary-General Ban Ki-moon on Friday offered to act as mediator between India and Pakistan to defuse rising tensions over disputed Kashmir.

The offer came after Pakistan’s ambassador met with the UN chief and urged him to personally intervene, while India said it did not want to aggravate the situation.

Ban called on “both sides to exercise maximum restraint and take immediate steps to de-escalate the situation,” a statement from his spokesman said.

The UN chief said India and Pakistan should address differences through diplomacy and dialogue, and offered to mediate.

“His good offices are available, if accepted by both sides,” the UN spokesman said.

Tensions between India, Pakistan have been boiling since the Indian government accused Pakistan-based militants of launching an assault on an army base in Kashmir earlier this month that killed 18 soldiers.

India on Thursday said it had carried out “surgical strikes” several kilometers (miles) inside Pakistan-controlled Kashmir on what they called “terrorist” targets.

“This is a dangerous moment for the region,” Pakistan’s Ambassador Maleeha Lodhi told AFP after meeting with Ban at UN headquarters in New York.

“The time has come for bold intervention by him if we are to avoid a crisis, because we can see a crisis building up.”

Lodhi accused India of creating “conditions that pose a threat to regional and international peace and security.”

Ban is following the situation “with great concern,” said Dujarric, citing the escalating rhetoric between the two countries and the increased tensions along the line of control separating Kashmir between Pakistani- and Indian-controlled areas.

A UN military observer mission (UNMOGIP) is looking into reports of ceasefire violations along the line of control and will report to Ban, he added.

“UNMOGIP has not directly observed any firing across the line of control related to the latest incident,” he added.

In a statement to AFP India’s mission to the United Nations said “India has no desire to aggravate the situation,” and that “our response was a measured counter-terrorist strike.”

“It was focused in terms of targets and geographical space,” the mission said. “It is reflective of our desire to respond proportionately to clear and imminent threat posed by terrorists in that instance.

“With our objectives having been met that effort has since ceased.”

The Pakistani ambassador said she had suggested to Ban that plans for a visit to India and Pakistan expected in November could be brought forward to avert a crisis.

India and Pakistan have fought three wars since they gained independence from Britain seven decades ago, two of them over the disputed Himalayan region of Kashmir.