United against enemy: Rallies mounted in Quetta against Indian aggression

United against enemy: Rallies mounted in Quetta against Indian aggression 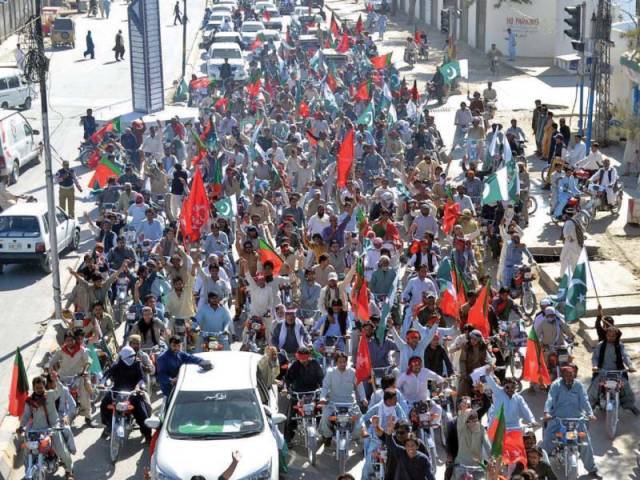 QUETTA: Several rallies and protests were staged on Friday in the provincial capital to protest against India’s violation of the Line of Control (LoC) and the killing of two Pakistani soldiers.

The protests and rallies were mounted by several political parties, student groups and members of the civil society.

A large rally was organised by the National Party (NP) and marchers set out from Kalat towards the provincial capital, expressing outrage over India’s unprovoked acts of aggression.

Addressing the protesters, NP leaders said: “Violating the LoC ceasefire treaty, India has proven once again that it loves war instead of peace,”

The protesters also set ablaze an effigy of the Indian prime minister as well as an Indian flag.

Haji Ismael Langove of the NP said: “We stand shoulder to shoulder with our brave armed forces; If necessary, we will sacrifice our lives for the country.

“Modi’s recent statement proved that, India is fueling terrorism in Pakistan and Balochistan,” he thundered.

Meanwhile, angry citizens and members of various groups of civil society also staged rallies to demonstrate their support to the armed forces.