The footpr­int is believ­ed to have belong­ed to Titano­saur that could have been more than 30 metres long
By AFP
Published: September 30, 2016
Tweet Email 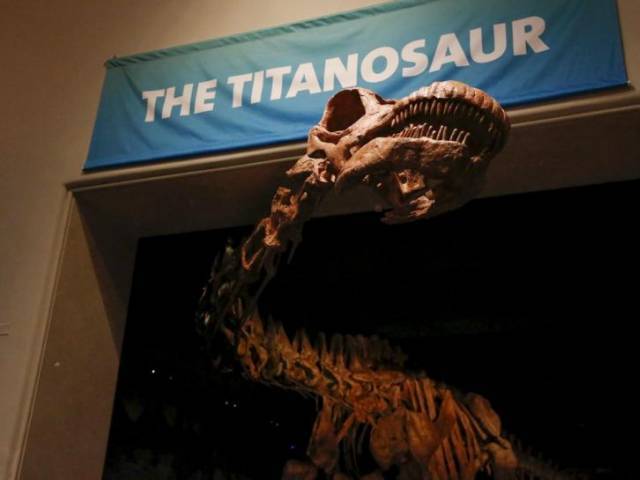 The skeleton cast of a titanosaur is seen during a media preview at the American Museum of Natural History in New York. PHOTO: REUTERS

TOKYO: One of the biggest dinosaur footprints ever recorded has been unearthed in the Gobi Desert, researchers said Friday, offering a fresh clue about the giant creatures that roamed the earth millions of years ago.

A joint Mongolian-Japanese expedition found the giant print, which measures 106 centimetres (42 inches) long and 77 centimetres wide.
One of several footprints discovered in the vast Mongolian desert, the huge fossil was discovered last month in a geologic layer formed between 70 million and 90 million years ago, researchers said.

It was naturally cast, as sand flowed into dents that had been left by the creature stomping on the once muddy ground. The footprint is believed to have belonged to Titanosaur, a long-necked dinosaur, and could have been more than 30 metres long and 20 metres tall, according researchers.

“This is a very rare discovery as it’s a well-preserved fossil footprint that is more than a metre long with imprints of its claws,” said a statement issued by Okayama University of Science. The Japanese university has been involved in the study with the Mongolian Academy of Science.