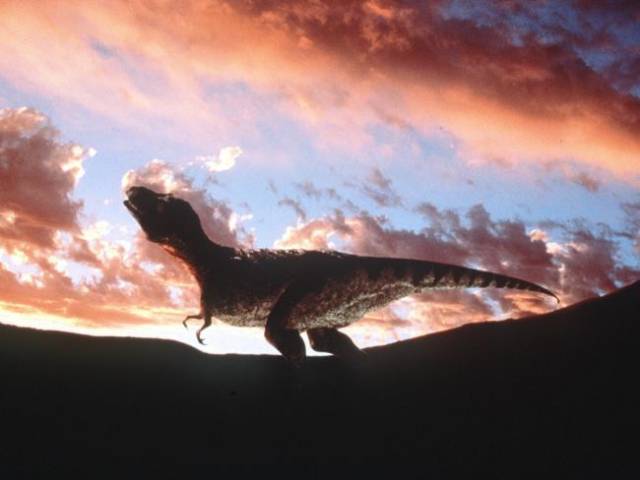 MEXICO: Sharks swim around a platform off Mexico’s east coast as scientists drill deep into the ocean floor, extracting the remains of the asteroid widely blamed for the demise of the dinosaurs.

Some 30 meters (98 feet) above the ocean floor, the researchers pull out cylinders filled with rocks that could unlock the mysteries of life and death caused by the cataclysmic crash in the Gulf of Mexico some 66 million years ago.

The remains of the space rock might even give them clues about the possibility of life on other planets.

The $15 million Expedition 364, an international team at sea since April, is the first to peer into the offshore side of the 200-kilometer wide Chicxulub crater. The crater is large enough to also straddle part of Mexico’s Yucatan peninsula.

“One of the exciting questions is what caused the environmental changes that led to a mass extinction and what insights arise from biologic recovery in the Paleogene (period),” Sean Gulick, professor at the Institute of Geophysics of the University of Texas, told AFP in the first visit for journalists to the platform.

The search is like looking for a needle in a haystack because the asteroid was pulverized by its apocalyptic impact, which destroyed 75 percent of life on Earth.

A team of 30 geologists, paleontologists and microbiologists from the United States, Mexico, Japan, China, Australia, Canada and Europe are working on the platform, which is located 33 kilometers off the Mexican coastline.

The scientists are drilling 1.5 kilometers (one mile) below the ocean floor, seeking microfossils and remains from the space rock.

Wearing helmets and protective gear, the scientists communicate with hand signals or by screaming over the loud noise from the heavy machinery as they work around the clock on the L/B Myrtle platform, a flat, seagoing vessel that jacks up on three pillars.

As they removed dark rocks from a meter-long tube, Auriol Rae, a geologist from the Imperial College of London, could hardly contain his excitement.

“These are the rocks we expected, but 30 meters shallower than we thought it would be,” Rae said, staring at the material that will later be cleaned, refrigerated and analyzed.

The rocks will be sent to Bremen, Germany, when the mission ends in early June, so that scientists can write about their discoveries.

For now, they know that the asteroid’s impact was so powerful caused material to fly into orbit and fall back into Earth like fireballs. Later, ash covered the skies, turning the planet into a dark and cold place.

“This created a chain of extinction. Months later, the dust fell on the continents and oceans, changing the chemistry of the oceans,” said expedition chief Jaime Urrutia, president of the Mexican Science Academy.

While there are still debates about whether the asteroid is solely to blame for the disappearance of dinosaurs, scientists agree that it caused great destruction and had a role in how life evolved after its crash.

The scientists of the International Ocean Discovery Program (IODP) and the International Continental Scientific Drilling Program (ICDP) hope that Expedition 364 can provide more answers about how life was extinguished on Earth, and then revived following the asteroid’s crash.

They have extracted thin and clear or black and shiny rocky material, as well as yellowish or green sediment.

Each layer corresponds to a moment in time between the Cretaceous — the last period of the dinosaurs — and Paleogene periods, said Ligia Perez, of the National Autonomous University of Mexico.

The crater has a circle of mountains known as the “peak ring” that are up to 500 meters high. The Myrtle platform’s three pillars stand on top of one of those peaks.

“There’s so much fracturing of rocks inside the peak ring that you think hot fluids rushed through it, that we might anticipate that there’s a great place for microbial life to occupy,” Gulick said.

“If it turns out that impacts are great places for life then maybe that’s why we should be looking for microbial life in other planets,” he said.

Joanna Morgan, a British scientist, said that before the impact the ocean’s microorganisms were diverse, large and complex.

But they became “much smaller and simpler” immediately after the asteroid’s hit.

Scientists may be excited about their work on the platform, but local fishermen are not pleased with the presence of the foreign object in their seas.

Guadalupe Alvarez, leader of a fishing cooperative, said the drilling noise has scared away fish such as red or yellowtail snapper.

“In places we used to catch 100 kilos, now we catch nothing,” Alvarez said.

The local government has agreed to pay 30 liters of fuel to each of the 1,000 fishermen because they have to travel farther to find fish.

But Urrutia said the machines were barely making any noise because the engines are on the platform.

A video taken by a submarine showed little fish swimming around the undersea drill as it perforated the soil.