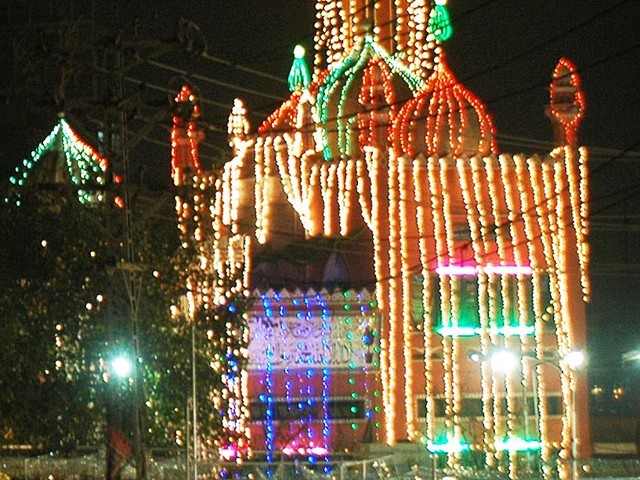 Processions to be taken out tomorrow after Zuhr prayers. PHOTO: ONLINE

LAHORE: Events held in connection with Eid-e-Milad-un-Nabi will kick off come Tuesday. Trails of the major processions can be traced with small green flags, which can be seen scattered around the city.

The Murtazavi procession, one of the oldest and largest processions taken out on Rabiul Awwal 12, will leave the city railway station and culminate at Data Darbar after passing through Australia Chowk and Barandreth Road.

A procession will leave Data Darbar for Astana Alia Irfania Chishtia, Sundar Sharif after Zuhr prayers on Wednesday. Another major event lined up for Eid-e-Milad is the 27th International Milad-e-Mustafa Conference at the Minto Park. Tahirul Qadri of Minhajul Quran, the organisation that arranges the event, will address the participants via video conferencing. Qazi Faiz, Minhajul Quran’s spokesperson, said that the event would start on Tuesday night and end early Wednesday morning.

Jamia Masjid Kashmir, Sadahvan, is holding one of the major processions, which will start from Akbari Gate and end at Data Darbar on Wednesday. Many other small processions are expected to join in.

District Officer (Planning) Rafique Jatoi said that the Lahore Waste Management Company (LWMC) had made a detailed plan for garbage disposal. “The staff will not get a day off on Wednesday. LWMC squads will constantly monitor all procession routes and will clean up after the processions,” he said.