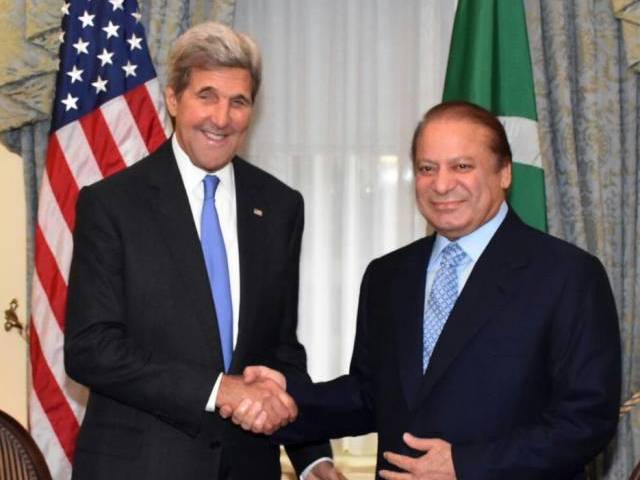 Prime Minister Nawaz Sharif discussed on Monday regional and international issues with US Secretary of State John Kerry during the former’s visit to New York to attend the 71st UN General Assembly session.

The meeting comes in wake of worsening ties between Islamabad and New Delhi after at least 17 Indian soldiers died in a separatist attack on an army camp in occupied Kashmir on Sunday.

Meeting between Prime Minister Nawaz Sharif and US Secretary of State John Kerry is in progress in New York. pic.twitter.com/WyH62SUqp0

During his stay in the US, PM Nawaz is expected to rake up ceaseless human rights violations by Indian security forces in the disputed Kashmir region.

Relations between the nuclear-armed neighbours have been on edge since a New-Year attack on an Indian air force base in Punjab, near the border with Pakistan, that killed seven uniformed men. India has blamed a Pakistan-based group for that attack but, after initial progress, an attempt to conduct a joint investigation has lost momentum.

The two sides have frozen a tentative peace dialogue. Kashmir has been divided between India and Pakistan since the two gained independence from British rule in 1947. Both claim the Himalayan territory in full.

Indian-held Kashmir has been in the grip of widespread protests against Indian rule for more than two months, sparked by the killing of a popular rebel leader in a gun battle with soldiers on July 8.

Over 100 civilians have been killed and thousands injured in the deadly protests and clashes, the worst violence to hit the region since 2010. Several rebel groups have for decades fought Indian soldiers – currently numbering around 500,000 – deployed in the territory, demanding independence for the region or its merger with Pakistan. Tens of thousands of people, mostly civilians, have died in the fighting.