Govern­ment, opposi­tion pass the buck to each other
By Sardar Sikander
Published: September 19, 2016
Tweet Email 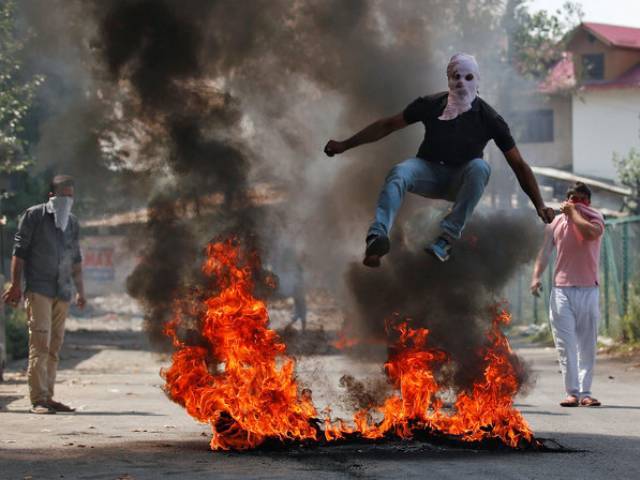 A man in a balaclava jumps over burning debris during a protest against the recent killings in Kashmir, in Srinagar, India September 12, 2016. REUTERS/Danish Ismail TPX IMAGES OF THE DAY

ISLAMABAD: While Prime Minister Nawaz Sharif readies to take on India at the UN General Assembly (UNGA) over atrocities in the Indian occupied Kashmir (IOK), his government has quietly shelved a  plan to convene a joint session of parliament on Kashmir following a lingering row with the opposition on several issues.

On July 15, a special cabinet meeting held in Lahore with PM Nawaz in the chair decided to convene a joint session of parliament on IOK in the backdrop of unabated brutalities of Indian forces against the people of the occupied valley. However, on account of the widening political gulf between the Pakistan Muslim League-Nawaz (PML-N) and opposition forces including Pakistan Tehreek-e-Insaf (PTI), Pakistan Peoples Party (PPP) and Jamaat-e-Islami (JI), the government has decided to discard the joint session plan, informed sources in the PML-N told The Express Tribune.

Till lately, the federal government was mulling over the option to convene the joint session during the recently concluded 35th National Assembly and 252nd Senate sessions. However, this option also remained far from realisation given the exchange of serious accusations between members of the treasury and opposition benches.

Earlier, Leader of the House in the Senate Raja Zafarul Haq confirmed to The Express Tribune that the government was considering convening a joint session on IOK during the last Senate and NA sessions. He, however, did not offer a direct comment when asked if the plan was shelved owing to political hostility. “Unfortunately, we have seen in parliament and outside, exchange of accusations and counteraccusations…given that it may not be suitable to convene a joint session, because desired results are hard to achieve. But nothing definite can be said,” the seasoned lawmaker said.

The opposition leaders, however, refused to buy this stance. “There is no difference of opinion on national issues,” PTI’s Senator Shibli Faraz told The Express Tribune.

Senator Faraz said that instead of taking the issues of national, regional and international importance to the parliament, the decision making is restricted to a handful members of the cabinet and PML-N. “When you run the affairs in an undemocratic manner, don’t complain that democratic arrangement is not allowed to function,” he said.

PM confers with Kashmiri leaders ahead of UN speech

It’s a pity that the PM went to UNGA without any seeking support of the parliament on Kashmir issue. “We will totally support the federal government and PML-N on the Kashmir issue in parliament,” Faraz said.

JI chief Sirajul Haq did not think differently. “Who has stopped them (the government) from convening the joint session? Why do they presume that parliamentary unity on Kashmir is hard to achieve in the existing circumstances?”

He said that no matter how serious the political differences may be, every patriotic political party in Pakistan unconditionally supports the Kashmir cause.

“The government should take the initiative and convene the joint session. We would be the first one to support them. It is a joke that our PM has gone to UN General Assembly to highlight the Kashmir cause but, back home, he fails to seek parliamentary support on Kashmir,” the JI chief said.

Leader of the Opposition in the National Assembly Khursheed Shah seconded the PTI and JI leaders. “There is not a single occasion when the PPP did not raise its voice in favour of Kashmiris and against the Indian brutalities in the held valley. My message to the PM and PML-N: If you do not want to materialise your promise and call parliament’s joint session to demonstrate political and parliamentary unity on such a crucial issue, you better come up with a valid excuse instead of cribbing and crying over your failures and blaming the opposition for your own follies.”