The new device­s come with Apple seekin­g to revers­e declin­es in sales of the iPhone­
By AFP
Published: September 7, 2016
Tweet Email 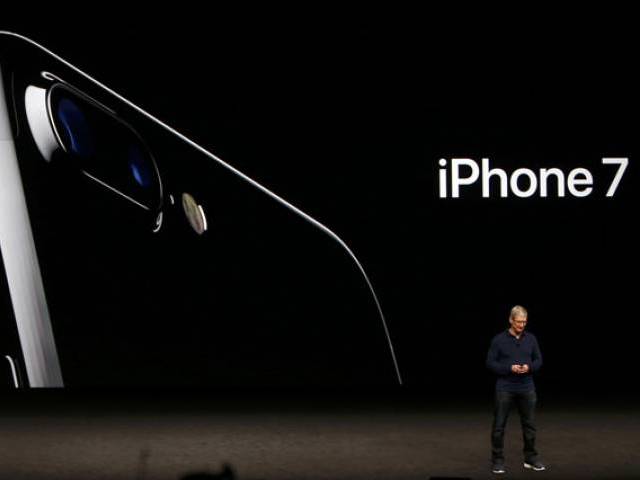 SAN FRANCISCO: Apple on Wednesday unveiled two upgraded versions of its iPhone and a new waterproof smartwatch, seeking to reignite growth for the iconic technology maker.

The iPhone 7 and larger iPhone 7 Plus, with new camera technology, 50-meter water resistance and other features, were the highlight of an Apple media event in San Francisco.

The new devices come with Apple seeking to reverse declines in sales of the iPhone in an increasingly saturated global market, and boost its Apple Watch – in a slump since the enthusiasm of last year’s release wore off.

Here’s everything you need to know about iPhone 7

“We are about to launch iOS 10, our biggest iOS release ever. It is jam-packed with new features,” Cook said. The flagship devices will be sold at around the same price as the models they replace, starting at $649 for the iPhone 7 for US customers, with deliveries in 25 countries beginning September 16.

One new iPhone feature – which may ruffle some feathers – is the removal of the headphone jack, requiring audio to be delivered via Apple’s proprietary “lightning” connector or by wireless.

“From the start we designed lightning to be a great audio connector,” Apple vice president Phil Schiller told the unveiling event.

“We are taking the headphones in iPhone 7 and 7 Plus to lightning, and including them in the box with the device.”

Apple will also include an adaptor to allow consumers to use existing headphones with the iPhone.

The iPhone 7 Plus, Apple’s version of a “phablet,” includes dual cameras to improve optical performance and photo quality, the company said.

While Apple has touted total iPhone sales of one billion, the number sold in the quarter ending June 25 fell 15 per cent from a year earlier, highlighting concerns over growth for the key profit driver.

Apple had saved a further surprise for its launch event, announcing jointly with Nintendo that “Super Mario Run” – featuring the iconic game character and developed specifically for mobile – will hit the App Store this year.

On the wearables front, its new Apple Watch Series 2 will also feature GPS – allowing people to gather fitness data during an outdoor workout without need to take along a smartphone. “We started shipping Apple Watch just 18 months ago, and already people all over the world are using it in many aspects of their daily lives,” Cook said. “But we are just getting started.”

Sales figures for the smartwatch are not disclosed by Apple, but surveys show enthusiasm has faded since last year’s release.

Apple saw a 56.7 percent year-over-year drop in sales of the device in the past quarter, research firm IDC said.