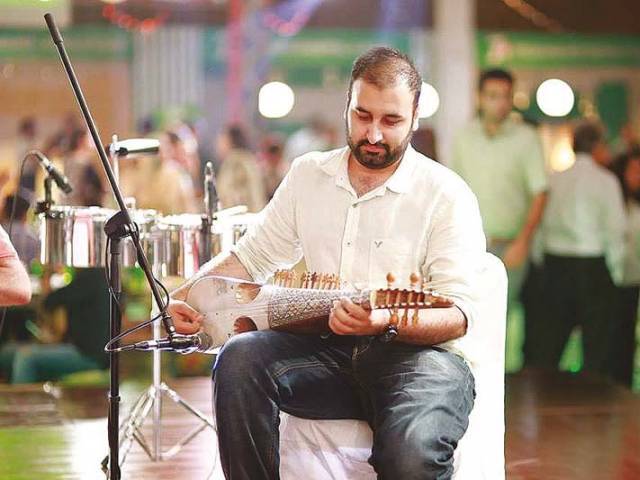 Bogra began teaching himself the rubab in 2006. PHOTO: PUBLICITY

KARACHI: Farhan Bogra of Khumariyaan is surely making it big. The rubab player has been selected for one of world’s most prestigious artist residencies, the Music Action Lab in San Francisco. With this, he aims to bring the forgotten folk instrument to the international front.

Talking to The Express Tribune, Bogra revealed how he landed the opportunity. “I got to know about the residency through a friend Trista Yeager at Rock Paper Scissors, a music and technology PR firm in the US,” said Bogra. “I heard they needed musicians who have made a social impact and so I applied and well, here I am.”

For the residency, Bogra will be a part of a nine-member ensemble comprising musicians from various countries. Together, they will work on a project, conduct seminars and participate in different workshops.

Bogra believes the platform is going to give the instrument some much needed exposure. “Back in 2006, when I started learning it, people used to think of rubabs as something only drug addicts play. I remember there was only one shop where they were made and you couldn’t be seen carrying one. It was rough,” he recalled. “When I brought it home, no one would even touch it.”  Bogra added that there was a time before the wars when there used to be festivities and rubab was played and people enjoyed the performances. “Now, that’s all in the past.”

Nonetheless, the number of rubab players has been increasing over the past few years. “Now, thankfully, a lot of educated people are involved in it. The number is growing and I am continuing to do my part as well,” said Bogra. “We have taken the instrument to the world’s stage now and performed at SSXW (an annual conglomerate of film, interactive media, music festivals and conferences), been on the front page of the New York Times and promoted our culture as much as we can. I have even gifted rubabs to fifty musicians from Spain and Japan and many other countries, personally.”

For Bogra, the purpose of creating music is not just to make people dance. “I don’t want them to just think of music as something to dance to. It’s more than that. When you listen to our instrumental music, you need to feel it.”

The artist believes it is the government’s duty to help preserve culture and with a lack of respect for instruments comes a lack of preservation of culture as well. For instance, Bogra is saddened by the fact that the rubab had been associated with addiction. “We don’t have a single music academy in KPK. It’s the government’s responsibility to establish them and bring in instructors and musicians who can pass on the knowledge to children,” he said. “But sadly, there is nothing of that sort. There was even no one to teach me the rubab. They said it’s not what educated people do and that 0nly addicts play it. But I think if you give people music, they won’t get involved in drugs. Music doesn’t need drugs.”

The residency programme will commence on September 18 and run through October 14, after which, Bogra intends to return and convey his knowledge to local musicians. “After San Francisco, we will go to Cancún in Mexico for a program called Opportunity Collaboration where our ensemble will perform and show leaders around the world how music can have a social impact,” he shared. “All nine artists selected have contributed to society through their music and that’s why we were chosen. I intend to return and spread whatever I learn over there to musicians and everyone else interested here in Pakistan.”