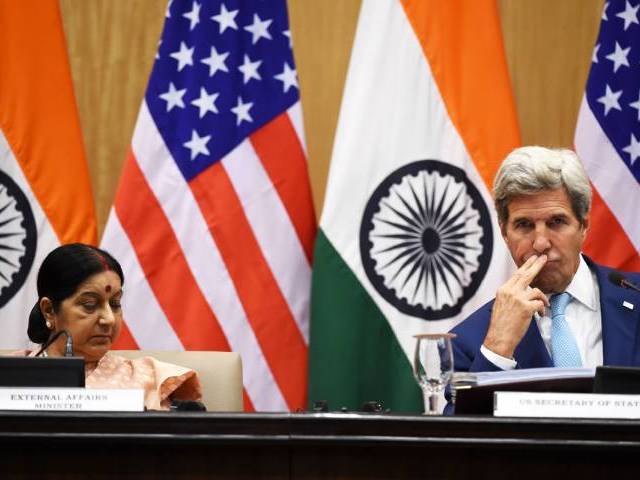 Independent observers also believe that the agreement would irk China and Pakistan, who are currently working on $46 billion CPEC project that apparently upsets both Washington and New Delhi. PHOTO: AFP

ISLAMABAD: Pakistan is assessing the possible ramifications of an agreement signed between the United States and India that would allow the two countries to use each other’s land, air and naval bases even though Washington assured Islamabad that the military logistics pact would not jeopardise the country’s strategic interests.

The agreement signed by US Defence Secretary Ashton Carter and his Indian counterpart Manohar Parikar on Monday is seen as part of efforts by the two countries to counter the growing maritime assertiveness of China, especially in the South China Sea.

Kerry calls for more efforts to purge Pakistan of militancy

Although there was no official reaction yet from Pakistan, officials privately admitted that the Indo-US agreement could alter the strategic balance in the already volatile region.

Officials said the concerned authorities were looking into the details of the agreement and its possible negative  fall interests as well as national security.’

The development comes at a time when relations between Pakistan and India are strained by the ongoing violence in Indian-controlled Kashmir.

It also coincides with a period in which Islamabad is increasingly concerned over a series of recent decisions by Washington to block military assistance as well as funds to purchase of F-16 fighter jets.

Last week senior US officials travelled to Islamabad to address Pakistan’s concerns over the defence pact, according to diplomatic sources.

Sources added that Special Assistant to the US President and Senior Director for South Asia Dr Peter Lavoy and US Special Representative to Pakistan and Afghanistan Richard Olson assured Pakistani authorities that Indo-US agreement would not hurt Islamabad’s interests.

However, background discussions with officials in Islamabad suggested that Pakistan was left unconvinced and considers the pact with great ‘concerns and suspicion.’

Independent observers also believe that the agreement would irk China and Pakistan, who are currently working on $46 billion CPEC project that apparently upsets both Washington and New Delhi.

Officially, China on Tuesday offered a guarded reaction to the agreement.

“We have noted the relevant report. Hope that this cooperation between India and the US would work to promote stability and development of the region,” Chinese Foreign Ministry spokesperson Hua Chunying said in response to a question about the Indo-US Logistics Exchange Memorandum of Agreement (LEMOA).

“For such normal cooperation between the two sides we are glad to see it happen,” she added.

However, an editorial in the Chinese state-run Global Times titled “Is India heading toward alliance with US?” urged India not to give up its neutrality.

“Due to its non-alignment policy, India has been given attention from all the major powers such as the US, Japan, China and Russia in recent years. Now is arguably a time when India has the most room for strategic manoeuvring.”

But the daily warned that a hasty alliance with the US could undermine Indian security instead of bolstering it.

“If India hastily joins the US alliance system, it may irritate China, Pakistan or even Russia. It may not make India feel safer, but will bring strategic troubles to itself and make itself a centre of geopolitical rivalries in Asia.”

No US bases in India

The agreement signed between US and India on Monday will only govern the use of each other’s land, air and naval bases for repair and resupply but does not foresee exclusive bases.

The agreement, a relatively mundane one concerning day-to-day military logistics, is considered a milestone in the US-India defense relationship because of the outsized political importance it had taken on in India. But both Carter and Parrikar clarified that the agreement did not allow for basing US troops in India.

“It’s not a basing agreement of any kind,” Carter said. “It doesn’t have anything to do with the setting up of base. It’s basically logistics support to each other’s fleet, like supply of fuel, supply of many other things which are required for joint operations, humanitarian assistance and many other relief operations,” Parrikar added.