Refugee who made it returns with drone to halt drownings

Refugee who made it returns with drone to halt drownings 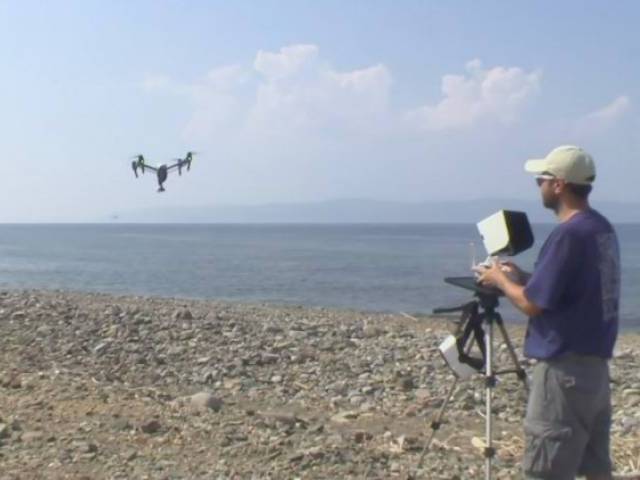 Standing on a pebbled beach on the Greek island of Lesbos, Mehdi Salehi searches for a good spot to set his drone loose.

Far from being a hobby flight, this is a project to save the lives of drowning refugees, designed by a 33-year-old Afghan who was once one of them.

Fifteen years after fleeing his home to escape the Taliban, this drone expert wants to help others like him survive the perilous crossing of the Aegean and Mediterranean seas that has claimed thousands of lives.

Founded by Salehi, “Drones for Refugees” is a project designed to enable rescuers to swiftly locate and reach migrant boats in difficulty, slashing time to reach them in a way that can mean the difference between life and death.

The sea route between Turkey and the Greek Islands has always been a favourite with smugglers, but in 2015, the numbers crossing that waterway exploded due to the Syrian conflict.

From his home in New York, where he lectures at Parsons School of Design, Mehdi saw dramatic news footage of dinghies packed to the brim.

He also saw the images of those who did not make it and decided to do something about it using his skills.

Under the burden of refugees

With the support of Parsons alumni and faculty, Mehdi and his partner Kristen Kersh bought and customised the drone tested on Lesbos. They added cameras, sensors, data-sharing points and designed an web platform. Footage from the cameras and the infrared sensors can be streamed live to websites as well as to mobile devices used by coastguards, search and rescue teams and merchant ships.

“It is very important that we work with them. We need to know how they work to better customise the drones and the data-sharing platform,” says Mehdi, whose project is still in its pilot phase.

Often portrayed as the eye in the sky of modern warfare, drone technology has tended to make the headlines for all the wrong reasons, notably when military strikes go awry claiming innocent lives.

But Mehdi insists the technology should used for saving lives.

“Drones can be used for the common good not just for military purposes.

“With the technology that we have today, people shouldn’t be dying at sea. When I crossed, we had to buy a paper map to find the closest point to Greece on the Turkish seashore,” he says.

“In 2016, with smartphones and drones already available to civilians, these sort of tragedies could be avoided.”

Esther Camps, Lesbos coordinator of Spanish lifeguard group Pro-Activa, says the project could provide vital information on what rescuers need to expect ahead of time: “If they need medical assistance, how many people are on board, if they have life-jackets on them,” she says.

“In 2016, with smartphones and drones already available to civilian,

these sort of tragedies could be avoided.”

Esther Camps, Lesbos coordinator of Spanish lifeguard group Pro-Activa, says the project could provide vital information on what rescuers need to expect ahead of time: “If they need medical assistance, how many people are on board, if they have life-jackets on them,” she says. “It’s quite difficult. You have to sail three or four hours until you arrive at the area where you are supposed to see the refugee boats,” Camps told AFP.

When Salehi crossed the Aegean from Turkey in 2001, he arrived on Chios island with a friend in a children’s plastic boat bought for $20 in Izmir.

“It was a dumb decision and we were very dumb kids,” he says with a wry smile.

“We didn’t have money to pay smugglers but I was going crazy in Istanbul. Living conditions were inhuman. We couldn’t swim, it was in fact my first time at sea but I convinced myself that if I had survived so far, I could also live through this.”

Salehi and his friend were arrested and thrown in jail for five months. Then, a random encounter changed his luck.

Isabelle, a Greek doctor working for Amnesty International, visited the prison where they were being held and Salehi asked her for help in filling out his Greek asylum application.

She found him a lawyer and he got his papers.

“I was very lucky. I got a lot of support from people that met me along the way, especially in Greece. They encouraged me and believed in me. Refugees and migrants, that’s what we need: an opportunity to thrive,” Salehi says.

“It’s a very harsh change for us, a different country, different environment but we can study and work and create wealth and jobs if they let us,” he explains.

Drones for Refugees plans to build bigger drones, able to fly over larger areas of the Mediterranean where the survival of refugees and migrants depends on being spotted and rescued by a ship.

Hopefully, the final and bigger prototype will be ready by the end of this year, Salehi says.

Until now, the group has been funding itself but Salehi and his team will need an extra injection of cash if they are to build larger drones with longer flight autonomy. After being granted asylum in Greece, Salehi obtained a master’s degree in architecture from the University of Volos in 2011.

Moving to the United States, he received a second master’s in design and technology from Parson’s School of Design in New York.

He is now a part-time lecturer at Parsons, part of the progressive New School which counts among its alumni Tennessee Williams, Marlon Brando and Donna Karan.