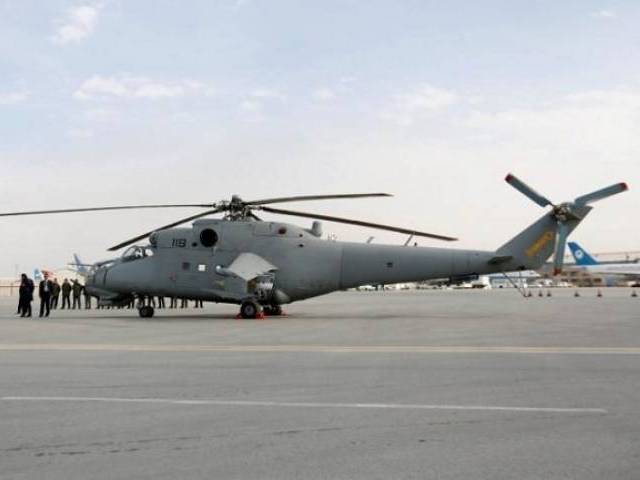 A helicopter donated by India is parked at the airport in Kabul, Afghanistan. PHOTO: REUTERS

India is set to deliver more arms to Afghanistan to help it fight militants, Kabul’s envoy to New Delhi said, even if Pakistan is wary of closer military cooperation between countries lying to its east and west.

India has provided a little over $2 billion in economic assistance to Afghanistan in the last 15 years, but has been more measured in providing weapons in order to avoid a backlash from Pakistan, which sees Afghanistan as its area of influence.

Last December, after years of dragging its feet, New Delhi announced the supply of four attack helicopters in India’s first transfer of lethal equipment to the government in Kabul since the hardline Taliban movement was toppled.

Kabul immediately deployed three of the Russian Mi-25 attack helicopters to go after insurgents, and the fourth will be inducted in the next few weeks.

Shaida Mohammad Abdali, the Afghan ambassador to India, said regional security was deteriorating and Afghan national forces were in dire need of military supplies to tackle the Taliban, Islamic State and other militant groups.

“We are grateful for the four helicopters. But we need more, we need much more. Today we are heading into a situation that is worrisome for everyone in the region including India,” he told Reuters in an interview.

On Aug. 29, the head of the Afghan army, General Qadam Shah Shahim, is expected in New Delhi to submit a list of military equipment drawn up in consultation with the US military, Indian defense officials said.

“The agenda for the army chief’s visit is clear. We will be finalizing the enhancement of defense ties,” Abdali said. India, he added, had told the Afghans that it would do whatever it could to meet the security forces’ requirements.

The fact that much of the proposed equipment originates from Russia need not be a stumbling block to an agreement, the United States has said, despite Western sanctions against Moscow.

Russia and the United States share a common goal in stabilizing Afghanistan, and India can act as a go-between to help re-equip Afghan forces which fall well short of the capacity required despite billions of dollars in US spending.

The Afghan government lost control or influence of nearly 5 percent of its territory between January and May, the US government’s top watchdog on Afghanistan said in a report, highlighting the challenges its forces are facing.

But the move to increase cooperation with Afghanistan is likely to aggravate fears in Pakistan of being wedged between two hostile neighbors.

Relations with both countries have cooled lately.

Afghanistan says Pakistan must do more to stop militants operating on its territory, while India has blamed Pakistan for unrest in the disputed region of Kashmir.

Prime Minister Narendra Modi turned up the dial a notch by making a rare reference to Pakistan’s restive Baluchistan province in a recent speech.

Asked about the prospect of closer military ties between Afghanistan and India, a Pakistan foreign ministry spokesman said the government did not comment on bilateral ties between two countries.

But he warned against attempts to destabilize Pakistan, which, like its arch-rival India, has a nuclear arsenal.

“Our expectation is that India should not be allowed to use Afghan soil to create instability in Pakistan.”

According to an Indian defense ministry official, discussions with Kabul included the possibility of increasing the number of Afghan officers being trained in Indian military institutions each year from around 800 now.

The United States, which has allocated more than $68 billion to train and equip the Afghan security forces since 2002, has welcomed greater Indian military assistance to fill shortfalls in hardware and personnel.

Earlier this month, the commander of US forces in Afghanistan, General John Nicholson, held talks with Indian officials to find ways in which New Delhi could help the Afghan air force, which is struggling to maintain aging Russian aircraft because of sanctions on Moscow.

Nicholson said donor nations had contributed $4.5 billion to Afghanistan, but those funds could not be used to buy Russian aircraft or spare parts because of the restrictions triggered by the conflict in Ukraine.

India is not constrained by such considerations and can export Russian-made equipment it already owns or source hardware and spares from Russia to send on to Afghanistan.

“Any additional aircraft or spare parts that India can provide Afghanistan would be greatly appreciated and welcomed by them to help build and maintain the Afghan Air Force,” Nicholson said at the end of his trip.

A Russian diplomat said Moscow supported efforts to strengthen Afghan forces, even if it cannot directly equip it.

“Our policy is simple; we would not like to be involved directly, but we would support any initiative that strengthens the ability of the Afghan authorities to fight against terrorist groups and stabilize the situation in the country,” the diplomat said.

Canada to US tourists: please leave your guns at home