Wrestlers to work as brand ambassadors for orphanage

Wrestlers to work as brand ambassadors for orphanage

First-ever pro-wrestl­ing event to be held in Pakist­an is also on the cards
By News Desk / Photo: Muhammad Javaid
Published: August 23, 2016
Tweet Email 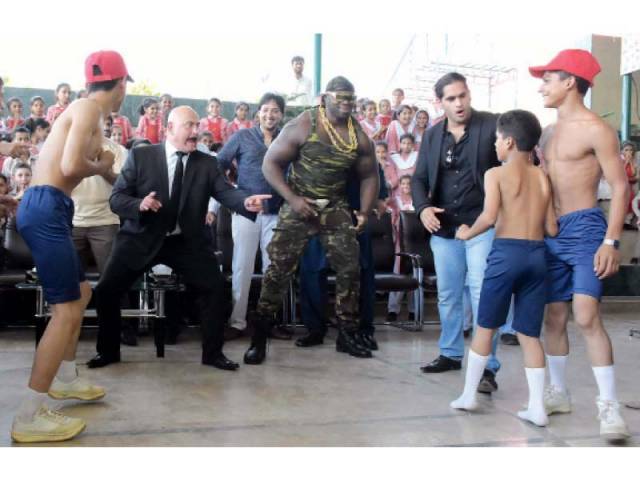 Children at the orphanage were ecstatic to see internationally-acclaimed wrestlers in their midst. PHOTO: MUHAMMAD JAVAID/EXPRESS

Internationally-acclaimed professional wrestlers will be working as brand ambassadors for one of the leading sanctuaries for orphaned children in the capital. The first ever pro-wrestling event in Pakistan is also on the cards.

The news was announced by Masscom Solutions CEO Qamar Chaudhry, while speaking at Pakistan Sweet Homes (PSH) in Islamabad, which was visited by acclaimed members of the wrestling fraternity, said a press release on Monday.

No orphanage for non-Muslims in Khyber-Pakhtunkhwa

Chaudhry said the wrestlers would represent the PSH and would promote the mission of Pakistan Baitul Mal (PBM) Managing-Director Zamurd Khan.

The CEO elucidated these details during a special visit of Badshah Khan, Flesh Gordon, a wrestling promoter from France, and Tiny Iron, a European champion.

The professional athletes were welcomed by Khan along with more than 400 children at the orphanage.

Moreover, the establishment of a special section in the sanctuary, as well as all pro-wrestling events conducted in Pakistan being free of charge for the PSH children, were also declared by Chaudhry.

Special training to the children would also be given coupled with the participation of pro-wrestlers at the PSH sporting events.

Badshah Khan, a French national of Pakistani origin, said that he was now a part of the PSH family and that he would impart training and knowledge to the children.

Tiny Iron said that he would have never been able to enjoy the beauty and passion of the people of Pakistan had he not accepted the invitation to the country.

The European champion particularly appreciated the reception he received from the PSH children.

Khan said that the presence of pro-wrestlers in the country was a manifestation of the fact that Pakistan was safe.

The children should emulate the example of Badshah Khan, notwithstanding he resides in France but- his heart beats in Pakistan, he added.

The highlight of the event was when 11 children wrestled with the professional athletes.

Fittingly, shields were distributed to the dignitaries by Shahid, a boy who had lost his legs as a result of a suicide attack in Waziristan.

Not kidnapped: Four girls missing from Lahore recovered in Pindi